Being the main focus of her life, tennis has opened multiple doors for Kelly Wren including high-level competitive opportunities, full-time employment, the chance to meet stars of the sport and a role coaching fellow PWID athletes. 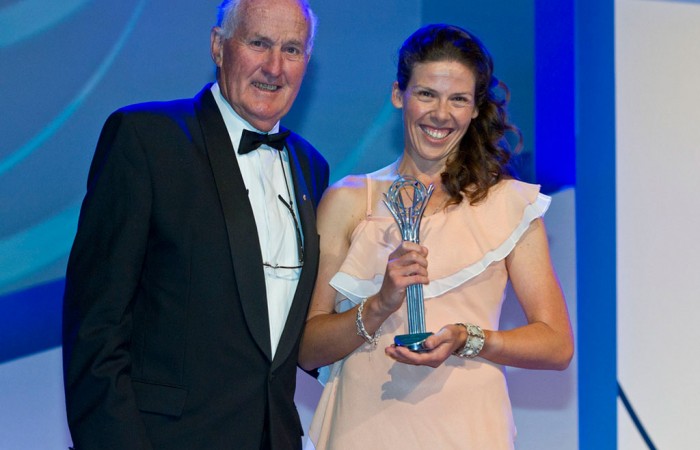 “I began playing tennis at eight years old, playing paddle tennis on the back patio with a plastic bat. I had to ‘drop the ball, hit the ball’; that was the game. [I first remember] enjoying hitting the balls and learning how to hit properly.

“I asked if I could learn to play tennis. Mum approached the local coach who said he would give me a trial for a 10-week term. I was with this coaching academy for 10 years, progressing to junior branch competition. My enthusiasm for the game and my enjoyment of being on the court was evident – and that was how I started.

“I did take a bit longer to learn things than some kids. I was taught to score using dots and dashes. This was a big challenge. I had to sit in the umpire’s chair and it was hard to figure out the score. The other kids would argue points and I then lost confidence in my scoring. It was not fun to have little boys confusing me. [Yet] once I started to play in adult competitions I did not have the same problems because you score on the court and I had a partner to help me.

“John Newcombe is my idol. I met him at a charity tennis day and played with Tony Roche against John and another athlete. His sense of fun on the court and his praise when I sat with him on the sidelines was good. I [also] met Neale Fraser at the Newcombe Medal and he was very respectful to me when I won [Most Outstanding Athlete with a Disability award] in 2011.

“Tennis has improved my self-confidence and self-esteem, and given me confidence to find full-time employment; I now work full time at Rebel Sport as a sales ticketer. Through my connections at work, I was encouraged to apply for sponsorship with Prince because I use a Prince racquet. I was successful and Prince now help me with a racquet and a pair of shoes each year.

“Tennis is the main focus of my life. I have private coaching with my long-term coach Greg Gibson once a week, and play in a local competition on Wednesday nights and Saturday afternoons. I also participate in competitions that are run for athletes with a disability; I play in the national championships, the State Championships [in NSW] and sometimes I go to another state’s championships. [I also do] distance running for fun, such as the Sydney City to Surf.

“I coach athletes with a disability on Thursday afternoons and Saturday mornings after work. I started to do this to give back to my favourite sport and I really enjoy the improvements made by my athletes. I try to show them how much enjoyment they can have [like I do] by playing and competing.”