This article was first published in the April 2014 issue of Australian Tennis Magazine. Subscribe now!

The I Formation: when, why and how to use it

The I formation is largely associated with professional doubles teams, a blurring mix of cryptic hand signals and quick-fire movements which often results in some of the most exciting rat-a-tat exchanges in tennis.

However, the tactic needn’t be solely associated with the professional tour. While it may feel intimidating to experiment with something different, it can also be an extremely effective ploy at club level, a useful way of disturbing the rhythm of players used to returning against standard doubles formations.

So how does it work? Before the point, the server decides who will be covering the line and who will cover the cross-court return. The player at the net (referred to as “the poacher” by players on tour) crouches low in the middle of the service box, and moves in the opposite direction to his partner – either cross-court to try and intercept or back across to cover the line (known as “the alley”).

Australian Tennis Magazine caught up with record-setting doubles pairing the Bryan Brothers to discuss the intricacies of the I formation. 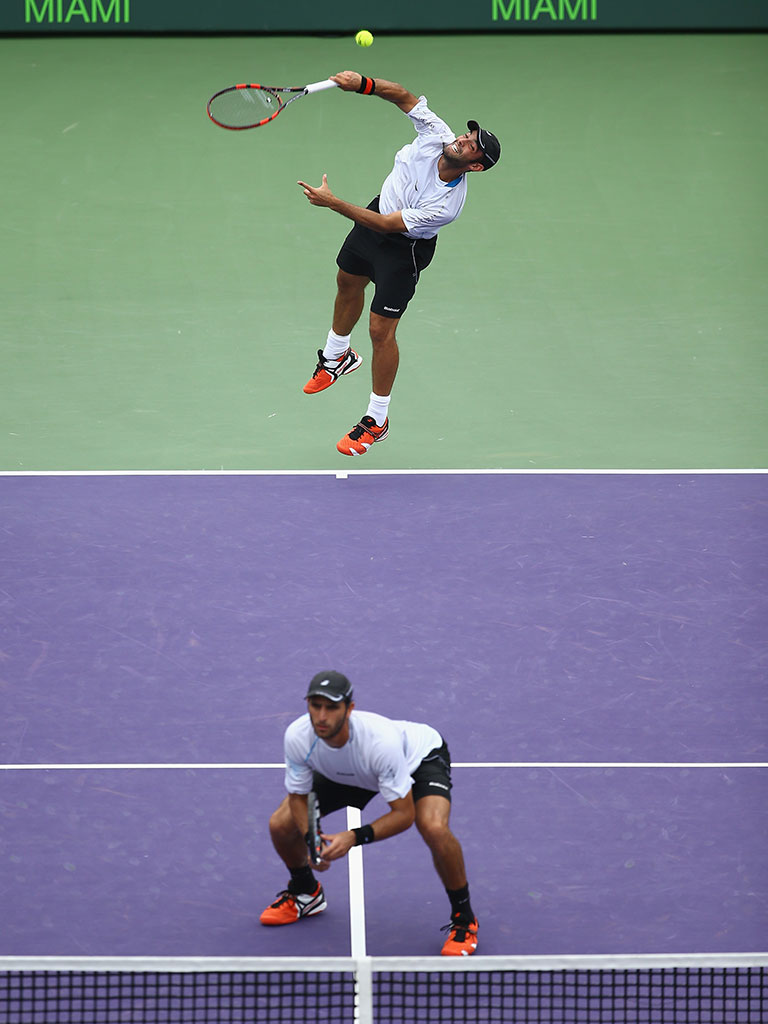 Bob Bryan likes to either switch to the I formation mid-match when opponents are returning extremely well, or use it right from the start when he knows that a pairing have a particularly vicious return game.

“Psychologically it’s a way to get their eye off the ball,” he said. “You’re hoping that they don’t see the space in the court as well, and create some indecision in their return game. We use it a lot against a Brazilian player called Bruno Soares who really returns well off the backhand side and hits it hard. But when we play the I formation, sometimes he’ll hold his return a little bit longer, giving us more time to close down the net.”

Mike Bryan says that the idea behind the I formation is to force the other team to play with a bit more risk and go for returns where the percentages aren’t so much in their favour.

“You’re trying to make them return up the line, which is over the high part of the net and a lot of players aren’t comfortable doing that,” he explains. “It also takes their poacher out of the play. Your partner can cover the cross-court, while you come in and volley up the line. Normally you’d be looking to volley cross-court where the poacher could be waiting.”

> 2 What are the disadvantages?

“It’s more of a gamble,” Mike muses. “We don’t use it all the time because we don’t like to give the returner an opportunity to end the point on one shot and at our level there are a lot of guys who can do that.”

“Yeah, the disadvantage is that you’re leaving the alleys wide open while one of you crosses to try and cover that side,” Bob chips in. “You’re looking to create some indecision but if a guy can return down the line with a lot of accuracy, you need to be prepared to switch to plan B.”

To minimise the risk of seeing your serve smashed for a straight winner down the line, the Bryans recommend serving down the T on both sides when playing the I formation.

“What most pros do is serve down the T because they don’t think that the returner’s going to be able to pull the ball up the line from that place in the court,” Bob says. “So most of the time they’ll serve hard down the T, and then the net man goes cross-court, forcing the returner to hit it down the line, which is a tough play to pull off when you’re on the stretch. It takes a lot of core strength to be able to do that.”

As a lefty/righty combination, the Bryans like to mix it in when serving to certain sides of the court, depending on the natural angle for the server.

“I’ll use it when I’m serving on the ad side because I can swing the ball down the T,” Mike says. Being a right-hander, he’s able to slice that serve down the centre, pulling the receiver even further out of position.

“Then Bob will use it on the deuce side because of the lefty swing down the T. But you just throw it in every so often to keep that little bit of indecision and doubt in the returner’s mind and make them think a little bit. We actually like to use it a lot on clay, especially on second serves.”

As a returner, when you haven’t come up against the I formation in a match before, it can be an intimidating prospect especially against an experienced partnership. The Bryans say that it’s extremely important to make your mind up early on and know what you’re going to do, before the serve comes down.

“On the first serve we like to make up our mind where we’re gonna hit it,” Mike says. “And then on the second serve, a lot of times you have more time to see the play develop and you can hit it to the guy that’s further back in the court.”

“Usually when you’re returning, you want to watch the server to see where he’s moving,” Bob advocates.

And then hit it towards him. That’s what most of the good returners do. They take their eyes off the net man because the good players are usually shaping to move in order to get your eye off the ball. You should watch the server and see where he’s running and then hit it to him so it takes the net guy out of the play because he’s the main danger.”

> Time the use of the I formation sparingly for the most success.

> There are risks, such as leaving the alley open, which can create confusion in your own camp.

> Quick decisions are required if you encounter as a returner.

> Hitting towards the server is often the best strategy.