Sam Stosur and Nenad Zimonjic have claimed the Wimbledon mixed doubles crown with a comprehensive win over Max Mirnyi and Hao-Ching Chan. 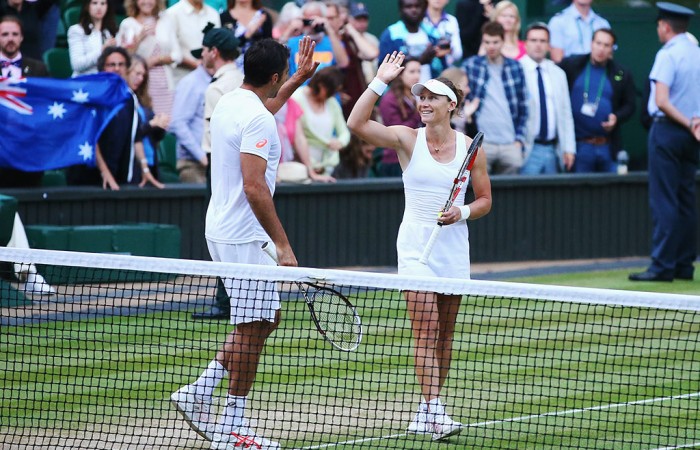 Sam Stosur and Nenad Zimonjic have claimed the Wimbledon mixed doubles crown with a comprehensive win over Max Mirnyi and Hao-Ching Chan.

Stosur and Zimonjic, the 15th seeds, beat the No.14 seeds from Belarus and Chinese Taipei 6-4 6-2 in just 56 minutes, watched on by Australian tennis legend and Stosur’s fellow Queenslander Rod Laver.

“We have played once before here at Wimbledon, don’t know how many years ago it was (it was in 2010), but didn’t quite work out as well as this time,” Stosur said.

“We had a great week together. It was a lot of fun. Very thankful that Nenad asked me to play. It was obviously a great tournament for us.”

Combining strongly, Stosur and Zimonjic were far stronger around the net than their opponents, with Zimonjic’s reflexes proving a particularly valuable asset for the duo.

When pushed back, it was Stosur’s turn to shine; the powerful Aussie frequently split Mirnyi and Chan down the middle with her heavy forehand.

“I think a big part of it is, being the girl on the court, it’s so important to hold serve. I think as soon as you feel like you can be making inroads on the other female’s serve you’re going to be in with a shot,” Stosur said.

“With Nenad at the net, unbelievable hands and volleys, he can really back up my serving, which makes me feel good and be able to relax a little bit more on that point.

“As soon as you get an early break ‑ I know we broke Max in that first set ‑ that’s a huge boost getting that break from the guy. Once we got the first one in the second set, I think we were able to play pretty loose and keep playing well.”

Stosur found herself serving for the match at 5-2 in the second set and made no mistake; she and her Serbian partner raced to 40-15, and although they missed one match point, a powerful first serve from Stosur drew a short reply from Chan, which Zimonjic volleyed for a winner.

It is Stosur’s second mixed doubles crown at the All England Club, and third Grand Slam mixed doubles title in all; she won at Wimbledon with American Bob Bryan in 2008, and at the Australian Open in 2005 with compatriot Scott Draper.