Tennis champions past and present have hailed Nick Kyrgios' emergence at Wimbledon as a breath of fresh air for the sport and a turning point for Australian tennis. 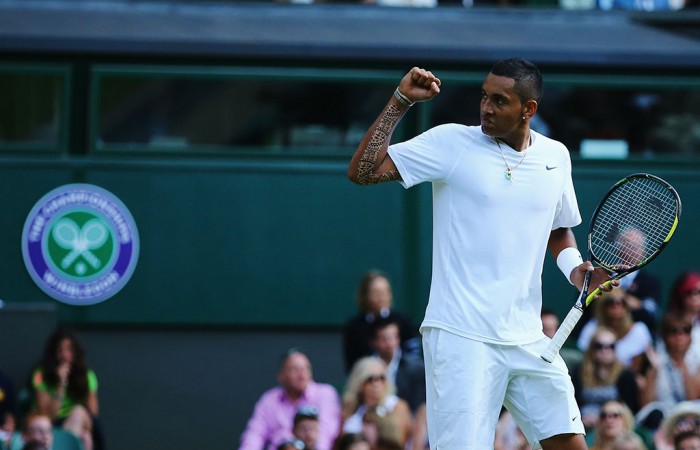 Tennis champions past and present have hailed Nick Kyrgios’ emergence at Wimbledon as a breath of fresh air for the sport and a turning point for Australian tennis.

The 19-year-old lost to Canadian eighth seed Milos Raonic on Wednesday to fall short of becoming the youngest man to reach the semifinals in 24 years.

But his run to the last eight, highlighted by an incredible upset win over world No.1 Rafael Nadal, has drawn high praise from the sport’s biggest names.

“It’s good for tennis to see that, because we lacked a little bit of successful teenagers in the last 10 years or so,” Djokovic said after beating Marin Cilic to reach the last four.

“So we have these youngsters coming up, fearless on the court, hitting the ball, not caring who is across the net.”

Roger Federer, who Kyrgios would have faced in the semis, spent a week training with the Australian in Zurich last month.

“It was nice to see how he works and how he plays in practice,” the 17-time major champion said after beating compatriot Stan Wawrinka on Wednesday.

“I think he’s going to rise up the rankings.

“We like these kind of stories from time to time in the tennis world, a youngster coming through the rankings so quickly.”

Raonic, himself one of the game’s rising stars, was ranked 380th when he was 19.

He paid tribute to Kyrgios after being pushed to four tough sets by the fatigued Canberra teen.

“It’s, in a lot of ways, inspirational for a lot of people to see.”

Australian legends believe Kyrgios can usher in a new era of tennis for the nation.

“It’s great for Australian tennis and it’s going to encourage a lot of others to work harder,” said eight-time major champion Ken Rosewall.

“Hopefully, that will include our group of young boys that are about the same age as Nick. It’s going to be better in the very near future for Australian tennis.”

Rod Laver, one of the game’s greatest players, was amazed by Kyrgios’ composure on the biggest stage in tennis.

“To see how he played against Nadal, with the pressure that was on him, being on Centre Court, I mean, it just showed that he doesn’t have nerves,” the 11-time major champion said.

Seven-time Grand Slam winner John Newcombe said Kyrgios’ performance over the past fortnight would inspire more young Australians to take up the sport.

“A lot of super young athletes are going to choose the tennis path now, which is going to help us a lot.”