Australian tennis legend Rod Laver is excited by Nick Kyrgios' potential but has cautioned against trying to predict how much the rising teenager can achieve. 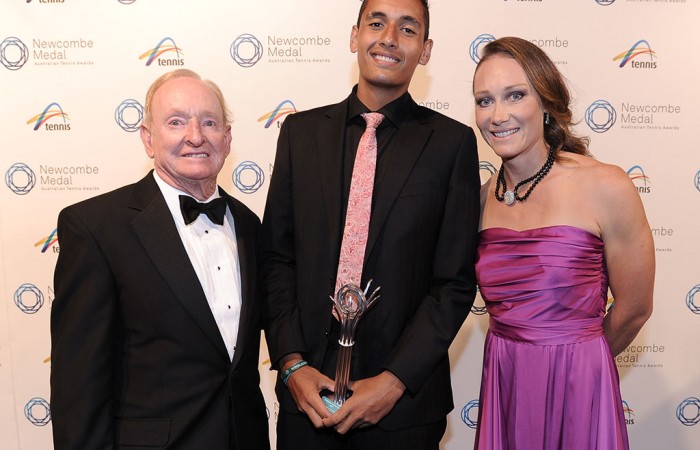 Australian tennis legend Rod Laver is excited by Nick Kyrgios’ potential but has cautioned against trying to predict how much the rising teenager can achieve.

Laver, an 11-time Grand Slam champion considered one of the game’s greatest ever players, believes 19-year-old Kyrgios will be competitive against world No.1 Rafael Nadal in the last 16 at Wimbledon on Tuesday.

However he says predictions of a single-figure ranking and Grand Slam glory in the future could be detrimental to the Canberra teenager’s development.

“That’s a mistake, it’s just people talking cheap news,” Laver said at the All England Club launch of his autobiography Rod Laver: A Memoir on Monday.

“Otherwise he (Kyrgios) is going to think, ‘I don’t have to work as hard now’ and that’s sort of the reverse you want him to be in.

“He has to try and practice even more and even harder.”

Laver was impressed when he saw Kyrgios play at the Australian Open in January, where he reached the second-round before falling in five sets to Frenchman Benoit Paire.

The 75-year-old believes Kyrgios’ run to the fourth round at Wimbledon shows he’s developed from a talented kid into a fierce competitor with character and an ability to play under pressure.

Laver doesn’t expect Kyrgios to beat Nadal but believes he can definitely trouble him.

“If he takes a set, it might be an upset in time,” Laver said.

“He’s got all the shots, Nick, so why not win? Even if he loses, if it’s close, he’s going to know how much he needs to do to really get to that next level.”

Another Australian legend, Ken Rosewall, said there was no reason why the confident Kyrgios couldn’t trouble two-time Wimbledon winner Nadal.

“Some players have performed well against Nadal because they’ve kind of hit him off the court,” four-time Wimbledon runner-up Rosewall said.

“I think Nick has the power to do the same thing, so it’s just whether he can do that power and technique and consistency long enough.”

Asked what he thought of Kyrgios’ potential, Rosewall said Kyrgios was “young enough to have a fair amount of improvement in his game.”

Kyrgios is bidding to become the youngest man to reach the quarter-finals since Bernard Tomic in 2011 and his run to the fourth round means he will break into the world’s top 100 for the first time.