Sensing some serious chinks in Rafael Nadal's Wimbledon armour, former champion Pat Cash believes Nick Kyrgios has the game to genuinely trouble the world No.1 in the fourth round. 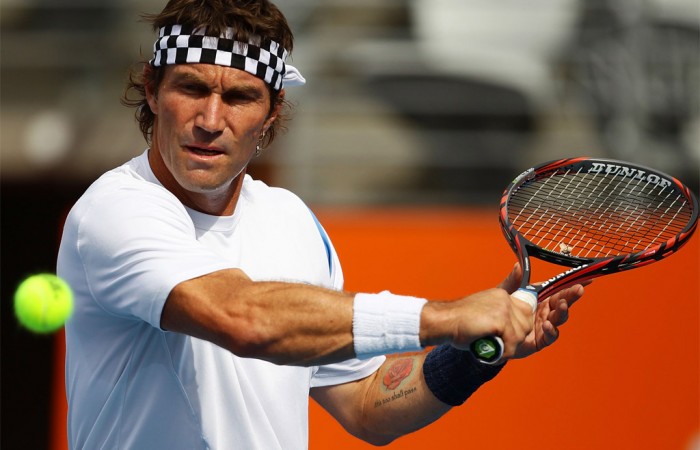 Sensing some serious chinks in Rafael Nadal’s Wimbledon armour, former champion Pat Cash believes Nick Kyrgios has the game to genuinely trouble the world No.1 in the fourth round.

Australian teenager Kyrgios continued his dream Wimbledon debut by defeating 68th-ranked Czech Jiri Vesely 3-6 6-3 7-5 6-2 in the third round on Saturday.

In doing so he set up a last-16 showdown with 14-time major champion Nadal on Tuesday, a match held over an extra day due to rain delays and likely to be played on the All England Club’s famed Centre Court.

Wildcard Kyrgios, ranked 144th and the at 19 the youngest man in the draw, believes anything is possible but a win would rank among the biggest upsets in Wimbledon history.

However Australian Cash, the 1987 champion, wouldn’t be surprised to see big-hitting Kyrgios take a set or two off Nadal, who has lost the first set in all of his three matches so far.

“I’ve watched Rafa play three times now, watched him very closely, and if Nick wants my advice I’d be more than happy to give it to him,” Cash said.

“It’s a big ask to say he’s going to win or get more than a set but you never know. Either way, it doesn’t matter. It’s just a great experience for him.”

Two of Nadal’s majors have come at Wimbledon, in 2008 and 2010, but in recent years he’s looked most vulnerable on grass – reaching the last 16 this year for the first time since 2011.

“He’s not timing the ball as well as you’d like at the moment and I don’t think his accuracy is quite there,” Cash said after Nadal defeated Kazakhstan’s Mikhail Kukushkin 6-7(4) 6-1 6-1 6-1 on Saturday.

“He didn’t return particularly well and I think that’s where Nick is going to have a good advantage.

“He will get a chance to hit some short balls and go for it.”

Kyrgios has served superbly so far, leading the tournament with 76 aces in three matches.

Doubles legend Todd Woodbridge said that would again be key against Nadal.

“He’s also going to have to use the lines well and be patient,” Woodbridge said.

“If he lets himself be dictated and moved around the court too much with the Rafa groundstrokes, he’ll find himself in trouble.

“Anybody that beats Nadal has to stand up in the court and take him on.”

“He’ll believe that he can win. He backs himself in these big moments like very few players do,” Eagle said.

“I think Rafa will be pretty nervous about this match. I think if all things go his way, Nick’s certainly going to be in there with a real chance.”

Kyrgios is bidding to become the youngest man to reach the Wimbledon quarterfinals since compatriot Bernard Tomic in 2011 and the first man to make the last eight on debut since Florian Mayer in 2004.