UPDATE 8:45am: Nick Kyrgios has staved off an incredible nine match points to upset 13th seed Richard Gasquet in a five-set thriller at Wimbledon on Thursday. 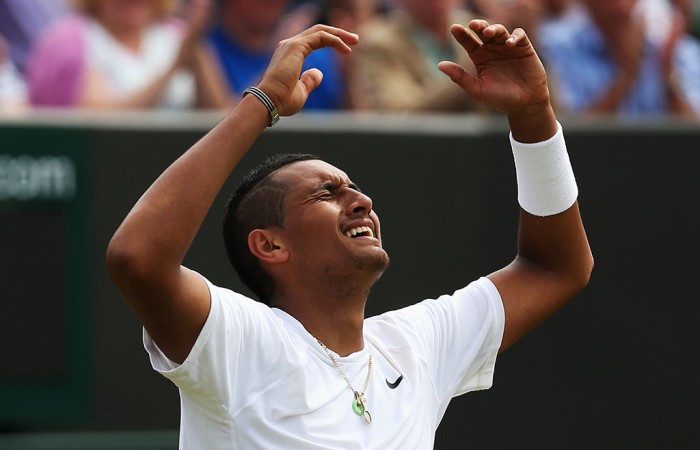 Australian teenager Nick Kyrgios has staged the performance of his life, mounting an incredible comeback to upset French 13th seed Richard Gasquet in a Wimbledon classic.

“It was an unbelievable match out there,” Kyrgios said.

“It’s definitely the biggest win of my career. I’m so proud of how I hung in and fought it out.”

Kyrgios became the first Australian into the third round, with Lleyton Hewitt behind 7-5 4-4 against Polish 15th seed Jerzy Janowicz when their second round encounter was suspended until Friday due to rain.

No player has saved nine match points and gone on to win a Grand Slam match in a decade, while it hasn’t happened at Wimbledon since 1966.

With nerves of steel – aided by a little luck and a vocal group of Australian supporters – Kyrgios answered every question asked of him in a high-quality final set with a string of aces and ferocious winners.

“I was just thinking about going through my routine (on the match points),” said Kyrgios, who blasted 21 aces.

“Just coming up with something, going after it, playing aggressive.”

In reaching the third round of a major for the first time, Kyrgios enhanced his reputation as one of the most exciting prospects in world tennis.

A beaten Gasquet joined a chorus of those tipping Kyrgios for big things.

“In the future he can be top five, he can win a Grand Slam of course,” the Frenchman said.

Ranked 144th in the world, Kyrgios earned a wildcard entry at the All England Club after winning a Challenger event in Nottingham earlier this month.

After battling past unseeded Frenchman Stephane Robert in the first round he was given an outside chance against world No.14 Gasquet, runner-up at Eastbourne last week.

However he didn’t find any real rhythm until the Frenchman had comfortably built a two-set lead.

Kyrgios kept his composure and gave himself hope by clinching a crucial break and serving out the third set.

Both men served well in the fourth set before Kyrgios found himself two points from defeat, at 0-30 trailing 5-4 before digging his way out of trouble.

He then broke in the next game with massive backhand winner before going on to level the match.

The final set was on serve until Kyrgios looked set to concede the match softly when he was behind 0-40 on serve at 5-4 down.

He rattled off a series of great serves to save three straight match points and it proved a sign of things to come.

Two games later, Kyrgios fended off another three match points, including one in which he had been called for a double fault, only for a Hawkeye challenge to pay off by a matter of millimetres.

The pattern continued for several games and the Australian’s refusal to give in finally took its toll when Gasquet surrendered serve to love.

Finally given his chance, Kyrgios didn’t waste it, holding to love to seal a potentially career-defining victory.

“It’s a massive stepping stone for me to finally reach the third round of a Grand Slam,” said Kyrgios, who hit 86 winners and 44 unforced errors.

“Especially to come back from two-sets-to-love down.

“It can be a building bridge for more things to come.”