Radwanska too strong for Dellacqua

UPDATE: A rejuvenated Casey Dellacqua took to centre stage at Wimbledon only to find No.4 seed Agnieszka Radwanska too strong, while Jarmila Gajdosova also fell. 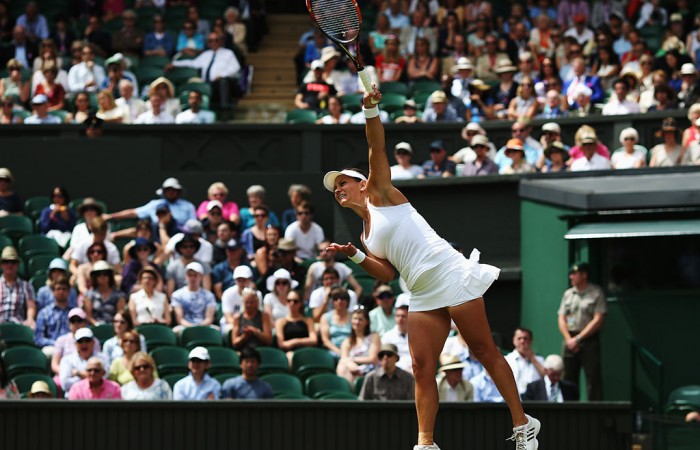 A rejuvenated Casey Dellacqua has taken centre stage at Wimbledon only to find Polish fourth seed Agnieszka Radwanska far too strong in the second round.

Dellacqua fought hard early but was outclassed in a 6-4 6-0 loss in the first match on Centre Court on Wednesday.

The 29-year-old Australian’s appearance on the world’s most prestigious court continued an encouraging career revival.

Dellacqua was ranked outside the top 200 late last year but she has since risen to a career-high mark of No.36.

Matching it with Radwanska, a former Wimbledon finalist, was always going to prove difficult.

“I don’t think the (second set) score was a reflection of how I played, to be honest,” Dellacqua said.

“I thought she had to play some good tennis to beat me.”

Dellacqua gave a good account of herself in the first set after it looked like she could be blown off the court.

Radwanska raced to a 5-1 lead and was serving for the set before the Australian staged a gusty fight back.

Dellacqua broke twice to get it back on serve at 5-4, however the comeback proved in vain as she dropped serve to love to hand the Pole the set.

The second set saw Radwanska, at her brilliant best, storm to victory in less than an hour.

Dellacqua was the first Australian eliminated from the second round, with six others in action on Wednesday and Thursday.

Wildcard entrant Gajdosova was gallant in defeat in a 6-3 4-6 6-3 loss to Portugal’s’s Michelle Larcher de Brito in a match finishing after 9pm local time.

Gajdosova was on a nine-match winning streak after qualifying for and then winning an ITF grasscourt eventin Nottingham the week preceding Wimbledon and then winning her opening round match at the All England Club over Stefanie Voegele.

But Larcher de Brito, also a winning streak of her own after qualifying for the main draw, proved too strong and advances to a third round meeting with Radwanska.