After an impressive debut at Wimbledon, Nick Kyrgios fears no man in the draw, and will take that confidence into his second-round match with 13th seed Richard Gasquet. 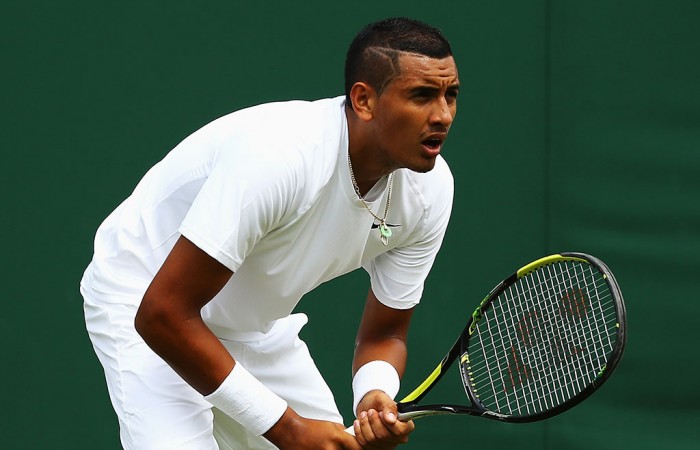 After making an impressive debut at Wimbledon, Nick Kyrgios fears no man in the draw.

Except, perhaps, his idol Roger Federer.

“Geez, I don’t know if I’d be able to perform playing Roger any time soon,” the rising teenager said after an opening-round defeat of French veteran Stephane Robert on Tuesday.

“I’d be admiring him too much.”

Kyrgios spent a week training with the Swiss maestro in Zurich last month; the experience greatly aided the 19-year-old’s rapid rise, which continued with a convincing display at the All England Club on Tuesday.

The former top-ranked junior needn’t worry about facing seven-time champion Federer – who’s in another quarter of the draw – just yet but there is the small matter of 13th-seeded Frenchman Richard Gasquet to contend with in the second round.

Kyrgios is far from daunted by the challenge, however, feeling he’s improved considerably and will match-up much better against the Frenchman away from clay.

“He’s been top 10 in the world and he can play on any surface, so it’s tough,” Kyrgios said of facing the Frenchman, runner-up at Eastbourne last week.

“He gave me a touch up in straight sets (in Davis Cup) but it was definitely close, definitely competitive.

“I know what to expect and I think with my game on grass, it will suit me more. If I serve well and play aggressive, it’ll be pretty competitive.”

While many of his fellow youngsters have struggled to make the transition from juniors to the senior tour, Kyrgios believes his serve is possibly what sets him apart.

“Especially on the grass its going to help me a lot,” Kyrgios said.

“Stats are stats but when I really needed it (against Robert) thought I served well and I thought that got me over the line.”

Already at a career-high ranking, Kyrgios is likely to climb to around 130 even if he falls to Gasquet.