Feeling his career has hit a turning point at Wimbledon, Luke Saville holds no fear heading into a showdown with a man tipped as a future superstar of men's tennis. 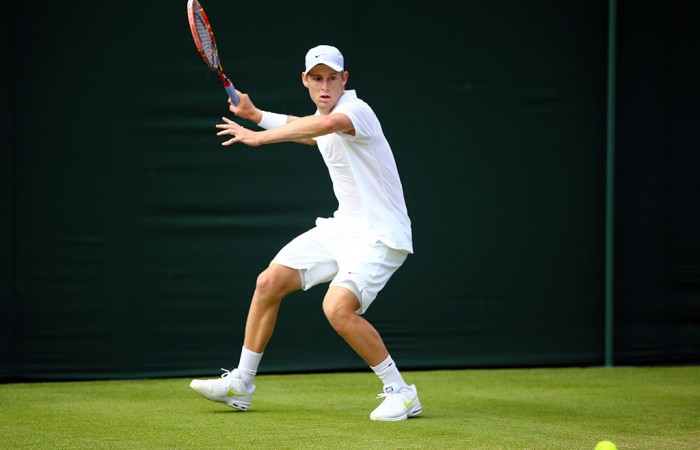 Feeling his career has hit a turning point at Wimbledon, Luke Saville holds no fear heading into a showdown with a man tipped as a future superstar of men’s tennis.

The 20-year-old Australian faces Bulgarian 11th seed Grigor Dimitrov in the biggest match of his life on Wednesday, having made a spectacular main-draw debut at the All England Club.

Qualifier Saville, defying his ranking of No.236 to upset promising Austrian world No.57 Dominic Thiem 7-5 6-4 3-6 6-4 in the first round on Monday, feels he has nothing to lose against a player nicknamed “Baby Federer”.

“I know it’s going to be an extremely tough match but I’m very excited,” said Saville of facing 23-year-old Dimitrov, who won the Queen’s Club title earlier this month.

“I’m very confident in my game at the moment. I’m playing well on the grass here and came through a very tough qualifying field.

“He’s an unbelievable player but I’m going to go out there and do my absolute best.”

While Saville’s showing this week has been a major surprise, he hasn’t exactly come from the clouds.

The South Australian is a former world No.1 junior and won the boys’ events at Wimbledon in 2011 and the Australian Open in 2012.

However, Saville found the adjustment to seniors more difficult than some of his compatriots and his ranking went backwards last year, at one stage in October falling out of the top 500.

“There’s no doubt I probably haven’t kicked on as much as a lot of people would have hoped, including myself,” Saville said.

“Not everyone can do a Nick Kyrgios or a Bernard Tomic and just burst onto the scene and become top 150 in their first six months out of juniors.”

Saville, though, feels his persistence and hard work under coach Grant Doyle is finally paying off.

He beat top seed Thomaz Bellucci in the first round of Wimbledon qualifying, backing it up with two more hard-fought wins before clinching his first tour-level victory against Thiem.

“Qualifying and winning a round here has really turned my year around and probably my career as well,” Saville said.

“It’s going to be a turning point but also, if I could go deeper, then it’d be just unbelievable.

“I know I’m up against it against Grigor, there’s no doubt about that, but I’ll fight it out.”