Stosur falls in Wimbledon first round

Sam Stosur's Wimbledon struggles have continued after being swiftly beaten in the first round by former world No.12 Yanina Wickmayer. 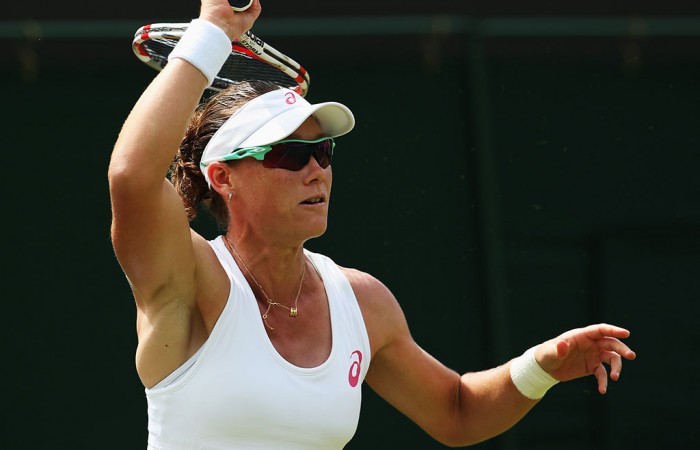 Sam Stosur’s Wimbledon struggles have continued after being swiftly beaten in the first round by unseeded Belgian Yanina Wickmayer.

The Australian’s 12th straight campaign at Wimbledon ended in disappointment as she fell 6-3 6-4 in one of the tournament’s opening matches on Monday.

The 69-minute loss continued a frustrating season for the 17th-seeded Stosur, and her long struggle to come to terms with grass court tennis.

The 30-year-old has never made it past the third round at the All England Club and it is the sixth time she’s fallen at the first hurdle.

The Australian had beaten world No.69 Wickmayer – a former world No.12 – in three of their four previous meetings but she made a slow start, dropping serve in the opening game.

Stosur smashed seven aces in the first set but couldn’t quite reel the efficient Belgian in; Wickmayer, 24, broke for the second time to seal the first set in 31 minutes.

Stosur had a great chance to hit back in the first game of the second second but failed to convert two break points in the opening game.

Wickmayer again took control to go 5-2 up but Stosur mounted a comeback, breaking back to get the second set back on serve.

However the Belgian responded again, breaking Stosur’s serve for the fourth time to seal the win and set up a second-round meeting with Croatian qualifier Ana Konjuh.

Stosur said she was always playing catch-up but felt like she didn’t perform too badly.

“I served very well but having that break of serve right at the start, for her to get that lead, obviously frees her up a little bit,” Stosur said.

“I don’t feel like I played that bad a match, to be honest with you.”

The Australian says she’s no closer to solving why she has historically struggled at Wimbledon.

“I’m pretty annoyed about it,” she said.

“I still think I’m a good enough player to get through first rounds here and for whatever reasons, it’s not happening.”