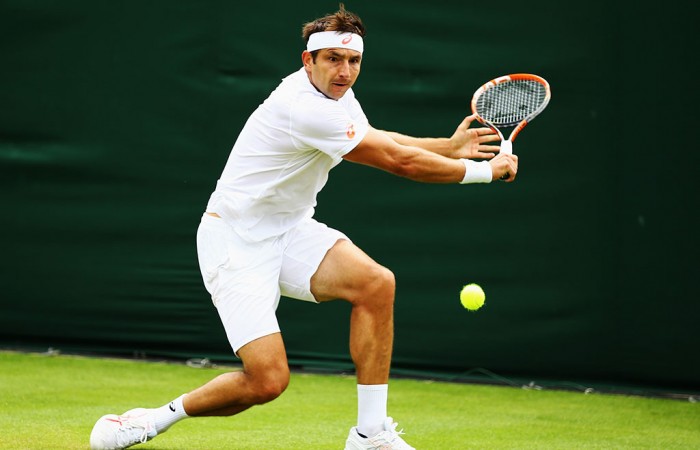 Marinko Matosevic has continued his impressive Grand Slam resurgence, ousting 18th-seeded Spaniard Fernando Verdasco in the first round at Wimbledon.

Just a month after finally breaking his long-standing duck in major tournaments at the French Open, the Australian reached his second successive second round with a 6-4 4-6 6-4 6-2 win on Monday.

Successfully employing a serve-and-volley approach encouraged by his coach Mark Woodforde, the Australian world No.58 set up a meeting with either Frenchman Jeremy Chardy or British wildcard Daniel Cox.

“Since we started working together again, he’s big on playing attacking tennis. He really focused on this grass court season. On hard court (it can) be tougher to do, but play to win, play grass court tennis,” Matosevic said of Woodforde.

He spoke of being “freed” by the result and kicked on with an impressive run on grass, including wins over Jo Wilfried-Tsonga and Marin Cilic at Queen’s Club.

That form, along with the fact he beat Verdasco on clay last year, had Matosevic upbeat about his chances of an upset at the All England Club, and he made a bright start.

“(It) just felt like a normal tennis match. There wasn’t like any crazy internal thoughts. I was just free to play tennis,” he explained.

The 28-year-old clinched the first break of the game to go 2-1 up, only to drop serve in the next game.

However Matosevic broke again to go 5-4 up and fended off three break points to serve out the set.

Verdasco edged a tight second set but Matosevic took the ascendancy in the third; he fought back from 15-40 down to hold serve at 4-4, then broke to love in the next game before taking the set.

Carrying all the momentum and cheered on by a small smattering of Australian supporters, Matosevic raced to victory in convincing style in the fourth set.

He was the first Australian through to the second round in singles after Sam Stosur lost in the first round to Belgian Yanina Wickmayer.