UPDATE: Ash Barty won her first ever Grand Slam qualifying match to advance to the second round of the Wimbledon qualifying event at Roehampton. 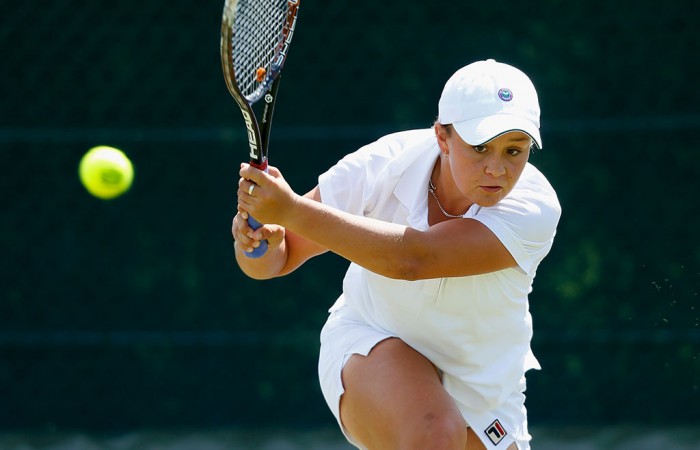 Australian teen Ash Barty has enjoyed a comfortable victory on Day 2 of the Wimbledon qualifying event at Roehampton.

The 18-year-old breezed to a 6-1 6-2 victory over Turkey’s Cagla Buyukakcay, yet compatriots Olivia Rogowska and Anastasia Rodionova were unable to join her in the second round; both fell to three-set defeats on Tuesday.

Rogowska’s loss was especially heartbreaking, with the Victorian just two points from victory when receiving in the 10th game, only to drop three straight games to the fast-finishing Irina Falconi of the United States.

For Barty, the victory against Buyukakcay marked her first ever victory in a Grand Slam qualifying draw.

She fell in the first round of qualifying at the US Open in 2011 and here at Roehampton last year.

“It always takes an adjustment period (moving quickly from clay to grass) but I’m never too stressed about changing (surface) because I know I’ll eventually get the feel again.

“I think serving (well) is a big part of grasscourt tennis and making a lot of first serves and making sure you try and get that first hit in in the rally, and I think I was able to do that pretty well today.”

Indeed, Barty’s powerful first serve and heavy forehand troubled her opponent, and the Queenslander also seemed better able to adjust to the windy conditions as well as the low and erratic bounces that are a feature of tennis on the lawns.

Adding to her confidence is the knowledge that she has come through qualifying at three WTA events already this season.

“They’re all the same girls (in qualifying here at Wimbledon), so it’s just like another tournament,” she said.

“It’s nice to be on the grass again and maybe have that slight edge over some of them. I played Cagla earlier in the year in Brisbane and it was a tough three-set match, so I’m really happy with the way I played today.”

In the second round, Barty faces Lyudmyla Kichenok of Ukraine.