UPDATE: Bernard Tomic enjoyed a straight sets win at the WTA/ATP grasscourt event at Eastbourne, while compatriots Sam Stosur and Chris Guccione fell in the first round. 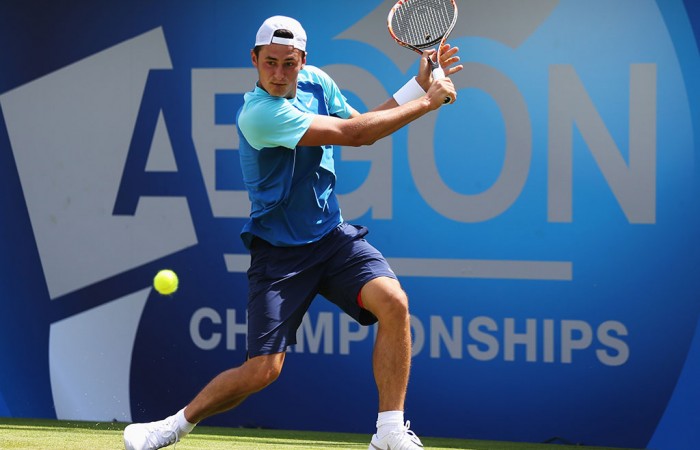 Bernard Tomic has offered another encouraging glimpse of pre-Wimbledon form with a convincing first-round win at the lead-up event in Eastbourne.

Tomic won only his second main draw ATP match since January in defeating Kazakhstan’s Andrey Golubev 6-4 6-4 at the tournament in England’s south on Monday.

“I think I served very well today and it’s something I’ve worked on in the last few days so it’s good to see it coming out in a match,” Tomic said.

The Australian will next face top-seeded Frenchman Richard Gasquet in the second round on Wednesday as he looks to build much-needed confidence ahead of his favourite Grand Slam.

Stosur, however, will head into Wimbledon on the back of two disappointing defeats on grass.

She was beaten by compatriot Casey Dellacqua in Birmingham last week before giving up a break lead in each set of Monday’s 7-5 6-4 loss to Wozniacki, playing her first match since an opening round loss at Roland Garros.

Tomic served well and looked in control against 55th-ranked Golubev, but only after overcoming a slow start and some early frustration.

The 21-year-old was clearly agitated and confused by loud umpiring calls coming from a nearby court in the first set, yet once the speakers were turned down and Tomic settled he was much too classy for his opponent.

The Australian beat Gasquet en-route to the last 16 at Wimbledon last year but has lost all four of their other past clashes, including a comprehensive defeat in the first round of last month’s French Open.

“I’ve beaten him on grass before, which is good confidence for me,” Tomic said of the Frenchman.

“I served very well in that match and I need to do that again. When I played him in Paris I didn’t serve well and didn’t feel good on the court so I need to come out confident.”

Tomic’s ranking has dropped to No.82 as he has struggled to regain his form following two bouts of hip surgery in February.

He defeated American Tim Smyczek in the first round at Queen’s last week before losing 7-6 7-6 to Radek Stepanek, who went on to beat defending champion Andy Murray.

Guccione, ranked 613th in the world in singles, had come through three matches in qualifying, yet went down to Simon 7-6(2) 6-4.