UPDATE: Marinko Matosevic has produced one of the biggest wins of his career over Marin Cilic at Queen's Club, while James Duckworth pushed No.2 seed Tomas Berdych to the limit. 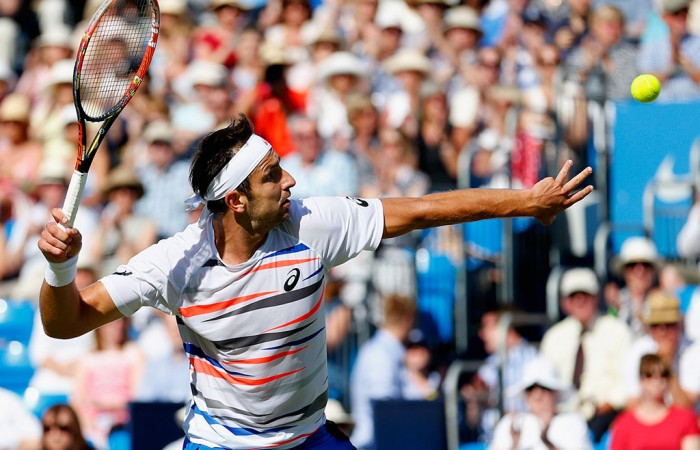 Embracing an “old-school Aussie” approach on grass has helped Marinko Matosevic pull off one of the biggest wins of his career at Queen’s Club.

Matosevic scored a clinical 6-4 6-4 victory over Croatian ninth seed Marin Cilic, a finalist for the past two years and the 2012 champion.

World No.60 Matosevic ended his Grand Slam duck at last month’s French Open, winning a first-round match at a major in his 13th attempt.

That allowed the 28-year-old to arrive on the grass with a new sense of freedom and he’s also been able to call on the expertise of his coach, six-time Wimbledon doubles champion Mark Woodforde.

Matosevic revealed Woodforde had been encouraging him to employ the aggressive serve-and-volley style used by Australian grasscourt greats of years gone by including Rod Laver, John Newcombe and Pat Rafter.

“He’s been telling me grass is about playing to win,” Matosevic said.

“So just trying to be aggressive and come forward and play the old-school Aussie way.

Matosevic made it to the final of a challenger event on grass in Nottingham last week and he carried that good form into Tuesday’s match, played on the centre court.

He didn’t drop serve once, and the errors and tension that have riddled his game at times were nowhere to be seen in a 77-minute victory.

The performance ranks up there with Matosevic’s previous biggest win, over Canadian star Milos Raonic in Washington last year.

It was also particularly sweet one, given two of his 12 Grand Slam first-round defeats came at the hands of Cilic, the Croatian who was ranked ninth in the world in 2010.

“I feel like I have been really close to beating him all previous times,” Matosevic said.

Meanwhile, Duckworth has never beaten a player ranked higher than 61st but gave the performance of his career so far in a loss to Berdych lasting two hours and six minutes.