Sam Stosur feels she let a golden opportunity slip after squandering a one-set lead against tournament favourite Maria Sharapova at the French Open. 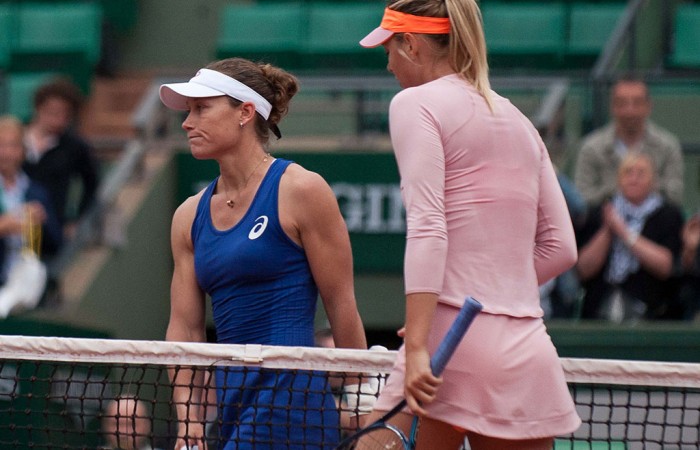 Sam Stosur felt she let a golden opportunity slip after squandering a one-set lead against tournament favourite Maria Sharapova at the French Open.

The Australian 19th seed had the 2012 champion on the ropes only to be blown away late, losing nine straight games in a 3-6 6-4 6-0 fourth-round loss at Roland Garros on Sunday.

While Stosur defied expectations to give the Russian seventh seed a significant scare, she couldn’t help but rue a chance missed in a wide-open women’s draw.

With the top three seeds failing to make the last 16, Sharapova loomed as arguably the 2011 US Open champion’s biggest obstacle on the road to challenging for a second grand slam title.

“I know it was an opportunity lost,” Stosur said.

“I thought I was there to win that match and definitely playing well enough to do so. I know that’s an opportunity I’m not going to get again.”

Stosur, continuing her superb run of form, was up 6-3 4-3, with the score locked at at deuce on Sharapova’s serve.

But the Russian rallied to clinch the second set and was at her ruthless, noisy and animated best in making light work of the third.

“Things kind of got a little bit hairy,” Stosur said.

“I actually can’t believe from that moment (in the second set) I didn’t win another game. How quickly things can turn.”

While Stosur’s mental fragility has been questioned in the past, she insisted she felt good early in the third set.

“But as soon as you open that door a little bit she can easily run away with matches,” Stosur said.

Stosur will still take encouragement from reaching the fourth round of a grand slam for the first time in two years on the back of what had been a frustrating season so far.

“I played well here. Probably some of the best tennis I have played for quite a few months,” she said.

“It’s something that I’m going to build on.”

The 30-year-old had won only two of 15 previous encounters with Sharapova but, after a slow start, she gradually wore the seventh seed down.

She broke twice, going a set up after 48 minutes when Sharapova double faulted.

It seemed inevitable the Russian would respond in the second set and so it proved as she took a 2-0 lead.

But Stosur pulled level, breaking back when Sharapova double faulted again shortly after being called for a time violation.

Serving superbly as she had all tournament, Stosur kept her nose in front and looked a strong chance of victory.

However, Sharapova, as she has done so many times in her career, asserted her dominance to book a quarterfinal showdown with Spaniard Garbine Muguruza.

Sharapova admitted she struggled with Stosur’s serve and slice early on.

“I think she has a great game for this surface and she’s proven that over the years,” Sharapova of Stosur, a two-time semifinalist at Roland Garros and runner-up in 2010.

“But with that said, I still was able to win nine games in a row so I’m quite pleased with that.”

Stosur’s exit ends Australian involvement in the singles at Roland Garros this year.