UPDATE: Sam Stosur continued her march through a wide-open women’s draw at the French Open with a classy straight-sets defeat of Slovakian ninth seed Dominika Cibulkova. 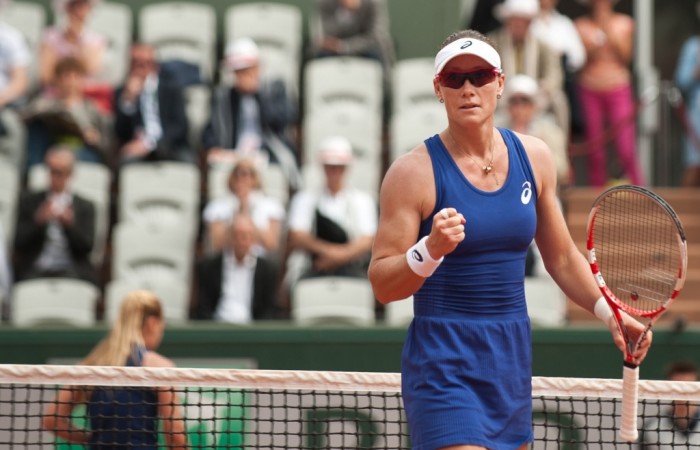 Sam Stosur’s French Open form is drawing comparisons to her run to the 2010 Roland Garros final but she’ll have to stop a red-hot Maria Sharapova to repeat the feat.

The Australian 19th seed reached last 16 of a Grand Slam for the first time since 2012 with an impressive 6-4 6-4 third-round win over Slovakian ninth seed Dominika Cibulkova on Friday.

It came as third seed Agnieszka Radwanska became the latest big-name women’s casualty at Roland Garros, further opening up the draw following the shock exits No.1 Serena Williams and No.2 Li Na.

Stosur, though, can hardly afford to look past Sunday’s fourth-round clash with Sharapova, who underlined her new-found title favouritism with a 6-0 6-0 demolition of Argentina’s Paula Ormaechea on Friday.

The Russian seventh seed holds a lop-sided 13-2 advantage in previous meetings between the pair but Stosur says the record won’t be playing on her mind.

“I have beaten her before. I know what it takes and I know I have to play very well against her,” Stosur said.

“I know there are certain things I have to do well and if I don’t then it makes life very, very tough that day. I will go out there and certainly give it my best shot.”

After comfortable wins over lower-ranked opponents in the opening rounds, Stosur was again ruthless and efficient in her match against Australian Open runner-up Cibulkova.

The Queenslander had never lost in four previous meetings against Cibulkova and the diminutive Slovakian was again troubled by Stosur’s powerful serve and top-spin.

The Australian blasted 10 aces and 32 winners, and made just 12 unforced errors, as she strung together three wins for the first time since the WTA event in Hobart in January.

On the back of a steady rankings drop and a disappointing start to the season, Stosur’s form at Roland Garros hasn’t totally come out of the blue.

She had some encouraging results in the claycourt events in Madrid and Rome earlier this month but her early French Open form has some even talking her up as a smokey for the title.

The red clay has often brought out the best in Stosur; she was runner-up to Francesca Schiavone four years ago and a semifinalist in 2009 and 2012.

Asked if she was playing as well as she did in 2010, Stosur said it was hard to make a comparison.

“Whether it’s the same or better or worse, I don’t know. But whatever it is, I’m quite happy with it.”

For the fifth time in the past six years, Stosur is the last remaining Australian in singles at Roland Garros.