Sam Stosur's French Open campaign picked up more early momentum with a 6-1 6-3 win over Austrian Yvonne Meusburger in the second round at Roland Garros on Wednesday. 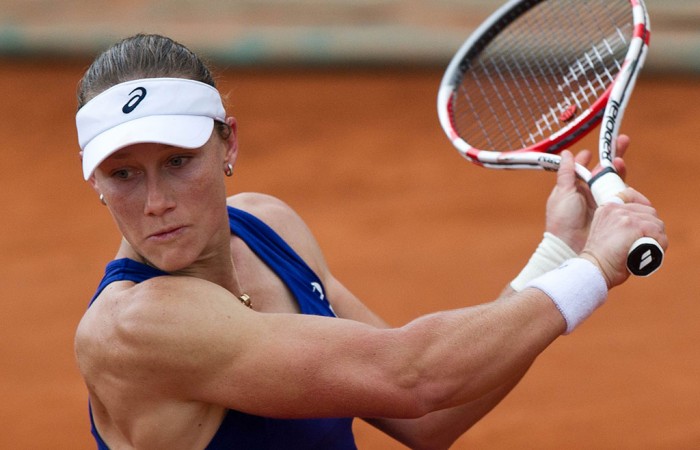 The Australian 19th seed picked up more early momentum with a 6-1 6-3 win over Austrian Yvonne Meusburger in the second round at Roland Garros on Wednesday.

But even before taking the court there was good news for Stosur as world No.1 and defending champion Williams, a potential quarterfinal opponent, fell 6-2 6-2 to Spaniard Garbine Muguruza.

With Australian Open runner-up Dominika Cibulkova to contend with in the third round, and possibly 2012 French Open champion Maria Sharapova after that, Williams’ demise may be academic for Stosur right now.

But it provides a huge incentive to build on her encouraging early form.

“It was a big upset,” Stosur said of Williams’ loss.

“Yeah, a little bit of an open section there now… but I don’t think it really affects me just yet.”

Stosur will take a 4-0 head-to-head advantage into Friday’s meeting with Slovakian ninth seed Cibulkova, including a comfortable win at the Madrid Masters earlier this month.

The Slovakian famously lamented Stosur “played like a man” after the Australian’s win in the Roland Garros quarter-finals two years ago.

“It’s a little bit of a different story this year. I’m feeling confident, feeling much better,” Cibulkova said after a 6-3 6-4 win over Austrian Tamira Paszek.

“She (Stosur) is also human, so I know what I have to do better against her.”

Stosur is bidding to reach the last 16 at a major for the first time since 2012 and came into the tournament on the back of a frustrating start to the season.

However, she’s produced arguably two of her best performances of 2014 in the opening rounds.

Stosur was ruthless in winning the first set on Wednesday in 30 minutes as Meusburger, a fellow 30-year-old ranked 38th, had no answers for her power and precision.

The second set was more of a battle, and some errors crept into Stosur’s game, but she never looked likely to relinquish control of the match.

“I feel like I’m playing the way I should play and can play,” Stosur said.

“Again today I was able to really dictate and did exactly what I wanted to do. That’s definitely a good feeling when you’re out there.”

While Stosur’s Grand Slam triumph came at the US Open in 2011, it’s Roland Garros that has yielded her most consistent results.