Four years and 13 matches after making his Grand Slam debut, Marinko Matosevic finally secured his first victory on the biggest stage by beating German Dustin Brown at the French Open on Tuesday. 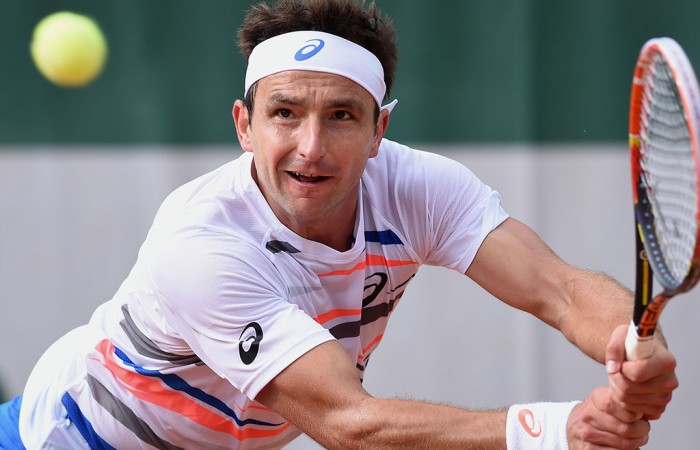 In the end, Marinko Matosevic made it worth the wait.

Four years and 13 matches after making his Grand Slam debut, the 28-year-old Australian finally secured his first victory on the biggest stage by beating German Dustin Brown at the French Open on Tuesday.

Matosevic became the only Australian man to reach the second round at Roland Garros 2014 as Lleyton Hewitt, Bernard Tomic and Matt Ebden all lost on Tuesday.

To say the 28-year-old looked relieved would be an understatement.

In a post-victory celebration that even caught the eye of his next opponent – Andy Murray – Matosevic dropped to the ground and embarked on a slow roll as he covered himself in Roland Garros’ red clay.

He screamed to his support group and threw just about everything in sight into the crowd, including his opponent’s water bottle.

Despite steady form on tour that had him ranked as high as 39th in the world, Matosevic had lost all 12 of his previous major singles matches, dating back to the 2010 Australian Open.

After taking a two-set lead on Tuesday it looked like a golden opportunity to end his drought was slipping away.

Brown easily won a third-set tie-breaker and raced to a 5-1 lead in the fourth before Matosevic’s new-found mental resolve helped him fight back.

“Obviously it (the grand slam record) played on my mind,” said 66th-ranked Matosevic.

“Not during the tour events, but when I came to the slam I definitely thought about it. You know, you guys write about it, other players know about it, so it was tough … I feel like there is a huge gorilla off my shoulders. Hopefully it can, I don’t know, free me up now.”

Matosevic’s reward for reaching his first second round is a meeting on Thursday with British seventh seed and Wimbledon champion Murray, who beat Kazakhstan’s Andrey Golubev 6-1 6-4 3-6 6-3.

Murray jokingly described Matosevic’s post-match antics as “interesting” but said he got on well with the Australian and respected his ability.