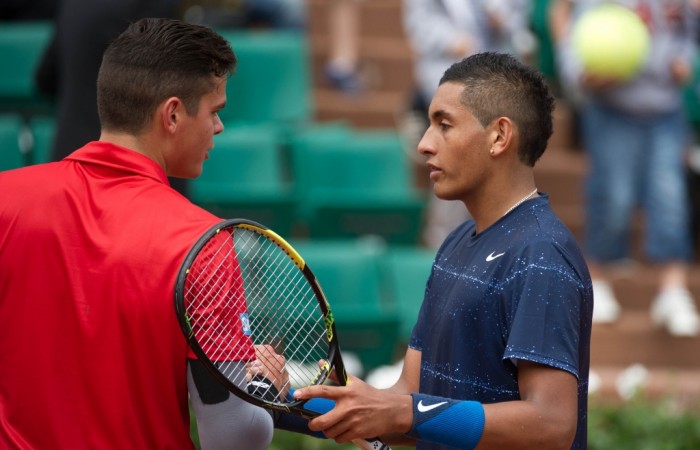 Kyrgios, at 19 the youngest man in the draw, became the first Australian to bow out of Roland Garros this year with a 6-3 7-6(1) 6-3 defeat on Sunday.

While wildcard entrant Kyrgios, ranked 160th in the world, could not repeat his first round heroics from last year he was far from disgraced in a match between two of tennis’ most exciting young prospects.

He made 23-year-old Raonic fight hard but the Canadian came up with the big plays at crucial times, banging down 18 aces as he secured a victory in two hours.

Kyrgios upset Czech veteran Radek Stepanek in Paris last year in his Grand Slam debut, while he also won his first round match at the Australian Open in January.

Repeating the feat was always going to be a huge ask against a rising top 10 player.

Kyrgios made a slightly nervous start in a match played under overcast skies on the Court Suzanne Lenglen; Raonic was always in control of the first set after breaking serve early and Kyrgios failed to convert three break points while trailing 5-3.

The Australian looked more composed in the second set, with his first service percentage improving markedly, and he finally converted a break point when he blasted a forehand down the line to go 4-2 up.

However the world No.9 broke back immediately and he thumped Kyrgios 7-1 in a second-set tiebreaker.

Raonic closed out the match with relative ease in the third, firing an ace to convert his third match point and reach the second round.

Kyrgios was encouraged by the fact he created opportunities against Raonic but felt he served too poorly to capitalise.

“I had numerous chances where I could have taken them and taken that second set,” Kyrgios said.

“Who knows? It could have been much closer than the scoreline says … I was creating chances against a top ten player, so you’re going to walk away confident.”

Kyrgios felt his fitness and movement had improved considerably in the past 12 months.

“I was feeling fine physically out there, so I can take away that I’ve done a lot more hard work as well,” he said.

“Hopefully I can keep working hard and string another year together and be here next year.”

Raonic said it was hard to rate Kyrgios’ potential being a young tour player himself but said: “There are a lot of weapons there that can make a lot of players feel uncomfortable.”

There are eight other Australians competing in singles at Roland Garros, with Samantha Stosur beginning her campaign on Monday and Lleyton Hewitt and Bernard Tomic starting on Tuesday.