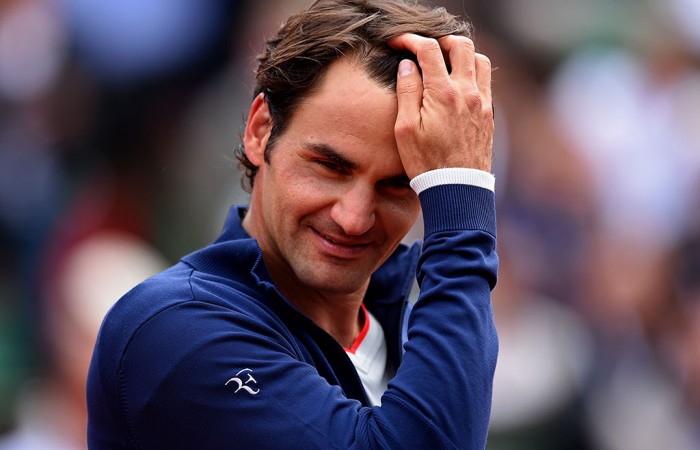 Kyrgios, at 19 the youngest man in the draw, was outclassed but far from disgraced in a 6-3 7-6(1) 6-3 first-round loss to eighth seed Milos Raonic on Sunday.

The Canberra teenager spent a week training with Federer in Zurich as part of preparations for Roland Garros and he made a strong impression on the 17-time major champion.

“I really like his game,” Federer said of Kyrgios after the Swiss fourth seed opened with a comfortable 6-2 6-4 6-2 win over Slovakia’s Lukas Lacko on Sunday.

“I think he’s very open to trying out things, going for the big shots. I think he’s got really great potential.”

But Federer also urged the 193cm teen not to let his talent go to waste.

“I think he’s strong physically but clearly he needs to keep working hard now to make sure he makes the next move and he’s solid for five hours, solid for two weeks, solid for one year, all that stuff,” Federer said.

Former top-ranked junior Kyrgios has struggled in the past with his fitness and admits he’s still some way off being physically ready for the rigours of the men’s tour.

He upset Czech veteran Radek Stepanek at Roland Garros in his Grand Slam debut last year, and also won his first round match at the Australian Open, but struggled to back it up in second round matches.

Kyrgios felt his performance against Raonic, where he had his chances and led 4-2 in the second set, showed he was already making significant progress.

“I was getting to a lot of balls I wasn’t going to get to last year,” Kyrgios said.

“I was feeling fine physically out there so I can take away that I’ve done a lot more hard work as well.”

Kyrgios will compete in the mixed doubles at Roland Garros alongside Swiss teenager Belinda Bencic, who fell to Venus Williams in the opening round of the women’s singles on Sunday.