Ash Barty and Casey Dellacqua came back from the brink on Saturday in Strasbourg, saving three match points to win their first WTA doubles title in almost a year. 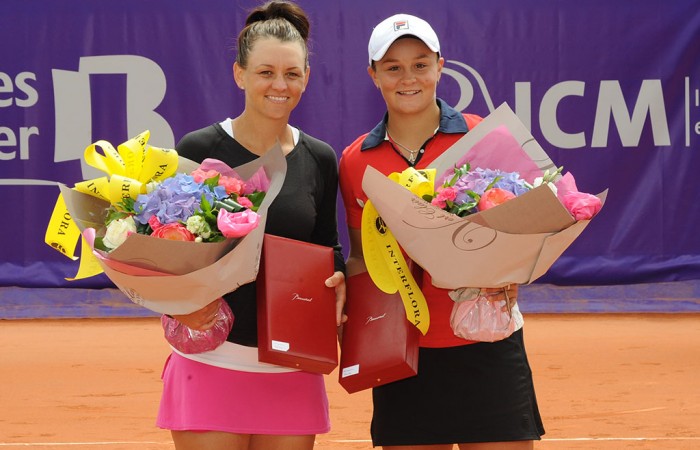 Ash Barty and Casey Dellacqua have recovered from near-certain defeat to win the doubles title in Strasbourg and boost their confidence ahead of the French Open.

Behind 6-4 5-1 and facing three match points, the second seeds recovered to defeat the little-known Argentinean-Chilean pairing of Tatiana Bua and Daniela Seguel 4-6 7-5 [10-4].

“I said to Case, I think at 5-2 down, at the end of the day were going to Paris this afternoon, we get to be in a beautiful city and play a Grand Slam tournament, so let’s go and have a rip,” Barty revealed.

“It kind of freed us up a little bit. When we were match points down we just kind of really buckled down and were more proactive, and I would say we were the dominant team out there. I think over the past week we’ve won a few ugly matches but we’ve done what we’ve needed to do and now we get to walk away with the title, which is amazing.”

Indeed, the title in Strasbourg is the pair’s second WTA crown – after Birmingham in 2013 – and sits alongside last year’s Grand Slam finals appearances in Melbourne, London and New York.

Although Barty and Dellacqua beat the third-seeded Taiwanese team of Hao-Ching Chan and Yuan-Jan Chan in the semifinals, Bua and Seguel had shown their mettle with three consecutive victories in match tiebreaks this week.

When the final commenced, it was the underdogs who flourished, racing to a set and a 5-1 lead and holding three match points in the ninth game.

But the Australians refused to be denied.

“Even though they’re an unknown team you can just tell that clay is their pedigree … we knew that they’d beaten some good teas and we didn’t underestimate them at all today,” Dellacqua said.

“Obviously we had to play our game a little more – be a bit more proactive, play aggressive. Do what we do well and not really get sucked into a bit of what they’re doing, and I think we were able to do that from 5-1 (down).”

The victory was Barty and Dellacqua’s first ever on clay together, and saw them recapture some momentum after a relatively lean start to the season.

They now head to Paris with their confidence bolstered ahead of the year’s only Grand Slam tournament on clay.

“We lost first round at the French (Open) last year and didn’t have a chance to play (on clay) beforehand,” Barty said.

“Knowing we’re one of the few teams going in there having won our last match will give us a lot of confidence and hopefully the draw will be kind to us and we can work our way in there.”