Nick Kyrgios lines up against eighth seed Milos Raonic on Sunday at Roland Garros in what will be one of the biggest matches of his young - yet burgeoning - career. 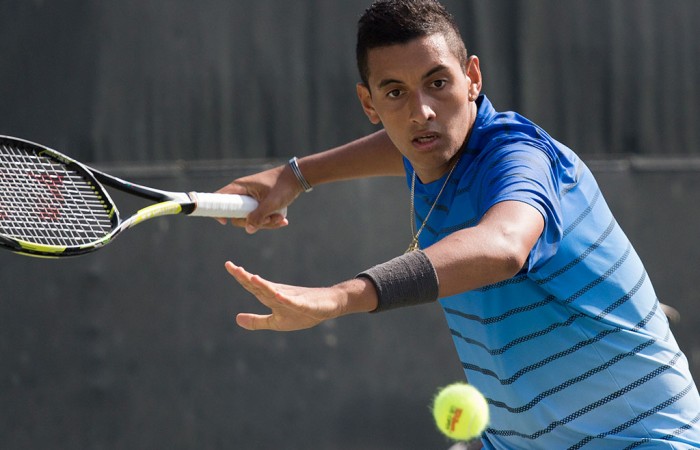 Nick Kyrgios will lead the Australian contingent into battle at the French Open in a match likely to be the first of many between two of the most exciting prospects in tennis.

Kyrgios, 19, is the only Australian in action on Day 1 at Roland Garros on Sunday and faces eighth seed Milos Raonic first up on Court Suzanne Lenglen (starting 1900 AEST).

Like Kyrgios, big-serving 23-year-old Canadian Raonic is considered a potential superstar of the sport.

And far from being daunted by the challenge, the Australian is relishing the chance to test himself against the world No.9.

“I’m going to expect some big serving there and I think I’ve just got to go out there, have some fun and put my best effort in from first point to last.”

“I took a lot of experience out of that and confidence that carried along with me for pretty much the whole year,” said Kyrgios, who also won a match at the Australian Open in January.

“It’s always a match I can look back on and say ‘I’ve performed here before I can do it again.”

The world No.161 also comes into the tournament buoyed by two recent Challenger title wins and a week spent training with Roger Federer.

Kyrgios is one of nine Australians competing in the singles at Roland Garros this year; compatriots Lleyton Hewitt, Bernard Tomic, Marinko Matosevic, Matt Ebden and James Duckworth will play first round matches on Monday or Tuesday.

Sam Stosur, the women’s 19th seed, will begin her campaign on Monday and her first-round assignment got even tricker on Sunday.

Her opponent, Puerto Rican Monica Puig, will come into the match on high after claiming her first WTA title at the claycourt event in Strasbourg.

“She must be playing pretty decent. Hopefully she’s a little bit tired after her big week of tennis in Strasbourg,” Stosur said.

“I know she tries to hit the ball big. She tries to play pretty powerful tennis so it’s not going to be easy by any means.”

Casey Dellacqua and Ash Barty will also carry winning form into their first round matches after combining to claim the Strasbourg women’s doubles title on Sunday.