He might be just 19 years old, but dramatic breakthroughs are already a theme for fast-rising Australian, Nick Kyrgios. 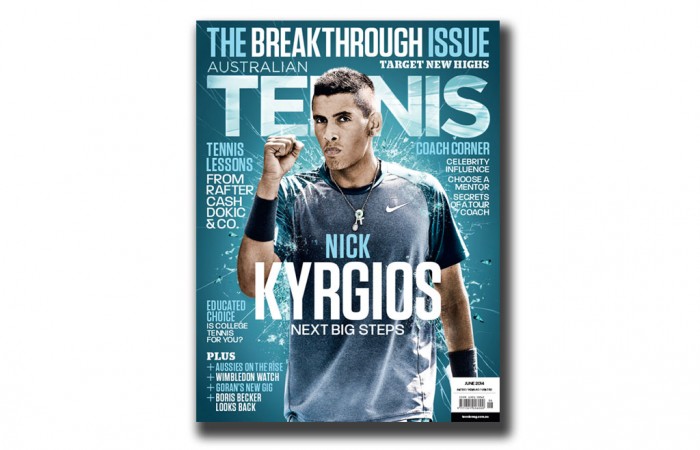 He might be just 19 years old, but dramatic breakthroughs are already a theme for fast-rising Australian, Nick Kyrgios.

Having achieved the world No.1 junior ranking, Grand Slam upsets, early career titles and asserted himself as the youngest member of the worlds’ top 200, there’s now another milestone as Kyrgios makes his Australian Tennis Magazine cover debut.

Celebrating the “Breakthrough” June edition, the magazine explores how far Kyrgios has progressed already and why he’s maintaining a down-to-earth approach, even as excitement builds around his own success and that of his good friends Thanasi Kokkinakis and Jordan Thompson.

“We have to stay grounded, stay humble and keep working hard,” says Kyrgios, who will take another step forward as a main draw competitor at the French Open, which starts in Paris on Sunday.

Along with tireless support from award-winning coach Simon Rea, Kyrgios has drawn on the inspiration and expertise of major-winning compatriots Pat Cash, Pat Rafter and Lleyton Hewitt in his impressive career development.

Australian Tennis Magazine, with a special “Lessons for tennis life” feature in which they pass on the one piece of advice that was instrumental to their own careers.

For some players, it’s the practical advice that will be most helpful – others share lessons that are as valuable to life, as they are to tennis. As Rafter writes: “the measure of success is not rankings or Grand Slam titles, but whether you have got the most out of yourself to be the best player you can be.”

With a simultaneous focus on coaches – the behind-the-scenes heroes in many career breakthroughs in tennis – other insightful reading this month includes how to choose a mentor and communicate with your coach.

Those considering the US college system to develop their tennis will find valuable information in a feature story that shows them how to take that path. There’s also instructional advice on returning serve, the drive volley and sliding on court.

For fans, there’s a guide to the big game players who could break through next, as well as entertaining feature stories on Boris Becker and Goran Ivanisevic.

Australian Tennis Magazine June issue will be available in Australian newsagencies from 2 June, or can be purchased via www.tennismag.com.au from 26 May.