Australian Samantha Stosur won through to the third round with a 6-2 6-3 defeat of Elena Vesnina of Russia in Rome. 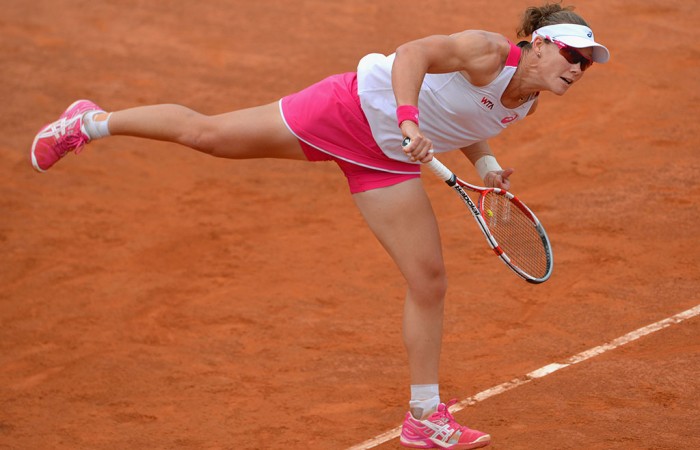 Australian Samantha Stosur won through to the third round with a 6-2 6-3 defeat of Elena Vesnina of Russia in Rome.

Stosur will face China’s world No.2 Li Na in the third round for a berth in the quarterfinals. In six meetings, Stosur is yet to drop a match to world No.2 Li. However, the two have not played since 2011, when they met on four occasions and Stosur won the US Open.

Since then, Li has stamped herself as one of the best in the women’s game, while Stosur has recently fallen outside the top 10.

In other women’s matches, top seed Serena Williams showed no sign of the thigh injury that forced her withdrawal from Madrid with a 6-2 6-2 win over Andrea Petkovic.

Williams said it broke her heart to pull out of Madrid, especially being the defending champion.

“But I knew that I wanted to play today. I’m not at 100 per cent but it’s getting better.”

“I’ll fly to Bucharest now for treatment to allow me to train next week for the French Open,” said Halep.

Frenchman Jeremy Chardy caught new father Roger Federer on the hop and Rafael Nadal had to fight to survive as leading seeds were tested by Frenchmen in Wednesday’s second round of the Rome Masters.

The seven-time champion wasted a match point in the 12th game of the second set and lost the ensuing tiebreaker.

Federer’s loss came barely a week after the 32-year-old became father to his second set of twins.

“Unfortunately, when I had the lead, I couldn’t stretch it. That’s how it happened today. We both struggled at time in the wind – at the end, it was a shot here or there that decided the match,” said the Swiss.

The fourth seed has never won the Rome title and faced brutal conditions amid strong bursts of red clay blowing regularly through the air.

Sixth seed Tomas Berdych beat Dmitry Tursunov 6-4 6-3 and seventh seed Andy Murray took revenge for a defeat a year ago as he beat Marcel Granollers to open with a 6-2 7-5 victory.

“I did a very good job; it was hard conditions. It affects significantly the way you play and the way you would like to play,” said Murray. “I tried to serve high percentage.

“But you have to play the wind, try to use it in your advantage if you can. I thought I did a good job of that.”