Stosur out of Madrid

Four-time Grand Slam title winner Maria Sharapova moved into the last eight of the Mutua Madrid Open Open on Thursday with a 6-4 6-3 win over Samantha Stosur. 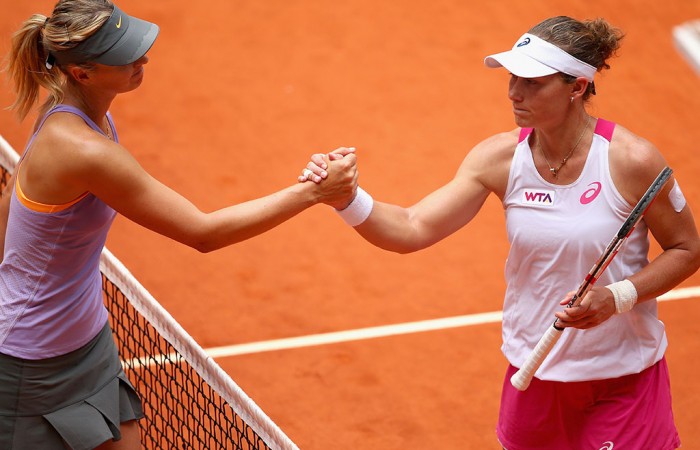 Four-time Grand Slam title winner Maria Sharapova moved into the last eight of the Mutua Madrid Open Open on Thursday with a 6-4 6-3 win over Samantha Stosur.

Sharapova’s big serving was the key as she was broken just once all afternoon to seal her 13th win over the Australian in 15 meetings and set up an intriguing quarter-final against world No.2 Li Na.

In the men’s Madrid Masters, Wimbledon champion Andy Murray was dumped out at the third round 6-3 6-2 by Santiago Giraldo.

Murray was competing for the first time in a month in the Spanish capital and was powerless to stop the in-form Colombian, who reached the final of the Barcelona Open two weeks ago, as he sealed victory in just over an hour to set up a quarter-final meeting with Spain’s Roberto Bautista Agut.

“He played very well from start to finish, he didn’t make many mistakes, but I didn’t make it hard enough for him in the second set towards the end,” said Murray

“I didn’t put enough pressure on him to force him to make errors. He
dictated most of the points and deserved to win.”

World No.1 Rafael Nadal remained on course to retain his title with a comfortable 6-1 6-4 win over Finland’s Jarkko Nieminen on Thursday.

Nadal had come into the tournament looking to dispel doubts after suffering shock defeats to David Ferrer and Nicolas Almagro in the quarter-finals of the Monte Carlo Masters and the Barcelona Open respectively.

Nieminen then briefly threatened a comeback as he broke back and even had break points at 4-4 in the second set, but Nadal held on before sealing victory when the world No.57 fired long in the next game.

“I am happy because I think until 3-0 in the second set I played the best I have on clay since I started in Monte Carlo,” said Nadal.

“It’s just a question of finding my rhythm, my level of play and I am doing that little by little.”

Next up for the 13-time grand slam champion is a meeting with sixth seed Tomas Berdych after the Czech came through in three sets against Bulgarian 12th seed Grigor Dimitrov 3-6 6-3 6-2.

Japan’s Kei Nishikori continued his fine form on clay after winning in Barcelona two weeks ago as he outlasted eighth seed Milos Raonic in two tie-breaks 7-6(5) 7-6(5).