The Gallipoli Youth Cup was officially launched in Melbourne on Wednesday, with the battle for 2014 honours now under way on the clay courts at Melbourne Park. 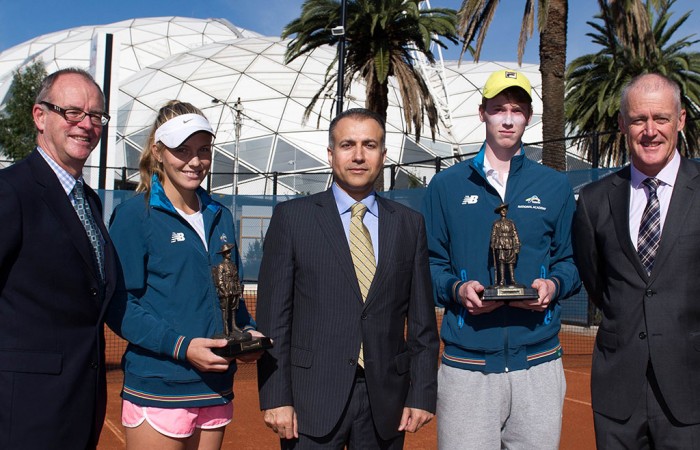 The Gallipoli Youth Cup was officially launched in Melbourne today, with the battle for 2014 honours now under way on the clay courts at Melbourne Park.

Australian rising stars Jake Delaney (Sydney, NSW) and Maddison Inglis (Maida Vale, WA) lead the boys’ and girls’ fields respectively, and are joined at the event by a host of local and international talent.

Former Australian Davis Cup captain John Fitzgerald said the tournament was a fantastic opportunity for young players to compete at a world class facility while commemorating the fallen soldiers at Gallipoli.

“The Gallipoli Youth Cup gives players the chance to compete at a first-class venue and also to honour those who served their country in war,” Fitzgerald said.

Off court the Gallipoli Youth Cup’s School Commemoration Program (SCP) continues to grow. The program has been embraced by schools, teachers and children from around Victoria, with almost 1000 students estimated to participate in activities this year.

The SCP is recognised by RSL Victoria, which helps to organise and present the education program.

“RSL Victoria sees the SCP as a key activity for the ongoing education of youth around ANZAC Day, and we look forward to developing this educational program for years to come,” said Michael Annett, CEO RSL Victoria.

Umit Oraloglu, Founding Director of Gallipoli Youth Cup, added: “With the support of RSL Victorian Branch and various other sub branches, I am confident we will achieve our benchmark in line with the centenary anniversary of Gallipoli next year.”

The Gallipoli Youth Cup and its School Commemoration Program are now part of the Australian Tennis Foundation.

The Gallipoli Youth Cup was first held in 2008 and is the brainchild of Oraloglu and Australian tennis legend and tournament ambassador Pat Cash, in partnership with Tennis Australia.

The event brings together the Australian and Turkish communities in commemoration of their shared ANZAC histories.

Consul General for the Republic of Turkey Mehmet Apak said: “The tournament offers a great opportunity to further build the unique friendship around a mutually binding Gallipoli theme.

“The School Commemoration Program is a fantastic way of engaging communities in commemorating the fallen soldiers at Gallipoli. It is an excellent way of blending sport and community involvement in an event of historic and national significance for both nations.”

The singles and doubles winners at this week’s event will receive a limited edition figurine containing authentic sand from Gallipoli, Turkey.