This article featured in the April 2014 edition of Australian Tennis Magazine, subscribe now.

The one-on-one nature of tennis is often held up as its main and enduring attraction. No small irony then that the measure of individual greatness is performance in the Grand Slams. The majors only emerged as the cornerstones of the game when their host nations – Australia, France, Great Britain and US – became the first to win the Davis Cup, the leading tennis teams event.

And even the greatest No.1s do not reach the pinnacle alone. Like Edmund Hillary and Tenzing Norgay, Muhammad Ali and Angelo Dundee, great feats in tennis have been achieved by double acts including Borg and Bergelin, Lendl and Roche, Becker and Tiriac, Agassi and Gilbert.

It’s hard to imagine the course Rafael Nadal’s career might have taken without his omnipresent uncle and coach Toni Nadal. Or Roger Federer without his ‘better half’, wife Mirka, a constant at every one of his record 17 Grand Slam triumphs. China’s trailblazing Li Na often makes husband Jiang Shan the butt of her jokes, while insisting he has been indispensable in her journey to a multiple major winner. As the team concept takes hold in tennis, the significant others in courtside boxes – whether coaches, physios, parents or spouses – assume ever more importance.

Many singles champions thrive in a team environment, enjoying the welcome break from individual pressures and scrutiny. Not least Lleyton Hewitt, Australia’s former No.1 and leading Davis Cup winner. Novak Djokovic, Rafael Nadal, Maria Sharapova and Venus and Serena Williams are all No.1s who have achieved ultimate team success in Davis and Fed Cup.

Seeing a singles winner translate their success to a team setting is one of the viewing highlights of the game. Is there a more anticipated storyline in tennis this year than the dream team of Federer and Stanislas Wawrinka striving to win Switzerland’s first Davis Cup?

Top tennis duos can inspire, dominate and change the game as much as any one great champion. So whether the feats are Davis Cup heroics, all-time doubles wins or groundbreaking player-coach partnerships, we salute here a top 10 of dream teams in the Open era.

The so-called ‘Dad’s Army’ of Rod Laver, aged 35, John Newcombe, 29, Ken Rosewall, 39, and Mal Anderson, 37, with 27 Grand Slam singles titles between them, was the greatest Cup team ever assembled. The Aussies defeated the US 5-0 in the final at Cleveland, with Rosewall left on the bench. Australia’s first Davis Cup winning team in the Open era, the 1973 side was captained by Neale Fraser but symbolised the last hurrah of the all-conquering Harry Hopman-led amateur teams. The last gilded win of Australia’s golden era.

Have any two players combined so successfully in tennis and life as Newcombe and Roche? The rugged Aussies were partners in a record 12 Grand Slam title wins, only overtaken as the leading major-winning duo by the Bryan twins in 2013. Post-playing days in the late 1970s, they teamed for Custom Credit Tennis, Australia’s first junior development program. From 1994-2000, Newcombe and Roche served as Australian Davis Cup captain and coach; both refused to take on the role without the other. They remain lifelong mates and the twin pillars of Australian tennis. 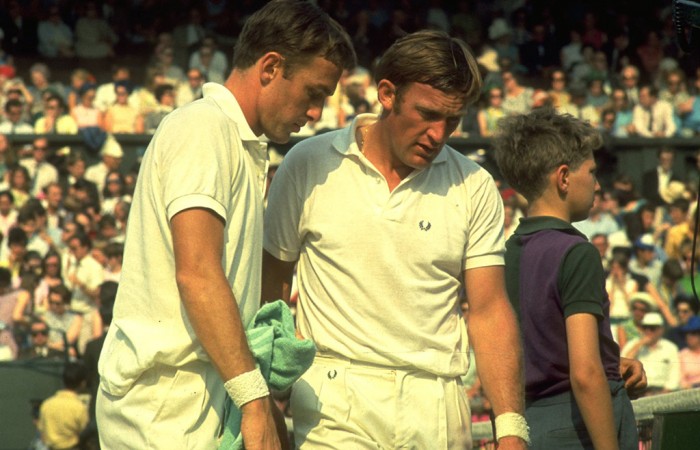 His spellbinding Wimbledon reign in 1976-80 made Borg the most compelling champion in the game’s coolest era. Coach Bergelin was as much a part of the Borg mystique as the Swede’s extreme topspin, icy calm and pin-striped Fila shirts. A fellow Swede and amateur player in the 1940s and ’50s, Bergelin lavished a fatherly devotion on Borg, while the champion never looked for another coach. They won 11 Grand Slam titles, the best coming last in an epic 1980 Wimbledon. Borg was also the golden boy who snared Sweden’s first Davis Cup in 1975. The captain? Bergelin.

The only team to achieve a Grand Slam in the Open era, in 1984, Navratilova and Shriver amassed 20 majors in the 1980s, and compiled the longest winning streak of the pro era – 109 consecutive matches, before they were tripped up by Aussie Liz Smylie and American Kathy Jordan in the 1985 Wimbledon final. The Americans’ game style was all-out attack, the right-handed Shriver’s height and reach complementing the lefty Navratilova’s athleticism and power. At their most successful Slam, the Australian Open, they won seven straight between 1982-89, transitioning without a hitch from Kooyong grass to Melbourne Park hardcourt.

The greatest doubles team of all time? “John McEnroe and anyone” according to Mac’s sidekick Peter Fleming, a throwaway line that became gospel. With Fleming, McEnroe collected a then-record 57 titles, in the days when he also dominated in singles. Even more commanding in doubles, McEnroe won more Grand Slams in team events than in singles (10 versus seven), reigned as the doubles No.1 for 270 weeks (bettered only by the Bryan brothers) and won with 14 different partners, including Michael Stich and Mark Woodforde in majors. His 71st and final title came in 2006 with new partner Jonas Bjorkman, at age 47.

Becker was a raw-boned, baby-faced teen when the Svengali-like Tiriac plucked him from obscurity and convinced the boy’s parents to let him manage and fund their 16-year-old son’s development. The rest is history. Not two years later, ‘Boom Boom’ Becker stormed to the 1985 Wimbledon title at age 17, stunning even the shrewd Tiriac, who chain-smoked three packs of cigarettes during the final. It was the thunderous first ovation of an operatic career which saw Becker win six majors, rise to No.1, touch off a tennis boom in Germany (exploited by the wily Tiriac) and contend with an unprecedented level of suffocating fame.

Mired in a mid-career slump, Agassi’s inspired, left-field choice of Gilbert as coach transformed his career, from wasteful underachiever to career Grand Slam winner and elder statesman. Gilbert was 32, a fellow competitor and with a young family, when Agassi approached him in early 1994. Six months later, Agassi was the only unseeded US Open champion, the first of six majors he won with the astute Gilbert. Their partnership survived a turbulent cycle in Agassi’s career and life that saw him plunge from No.1 to No.141 and all the way back to No.1. Gilbert’s ‘winning ugly’ never looked so good.

No one needed a purpose-built trophy room more than the Williams wonder gals, who have amassed 54 Grand Slam trophies, 13 won together, eight claimed at the expense of the other. Only 15 months apart, the sisters are awesome together in major finals: if they’re in it, they win it. Venus and Serena are undefeated in 13 Grand Slam and three Olympic finals across a span of 15 years. Equally devastating on serve and return and with an instinctive sense of each other’s play, the Williamses don’t play enough tour events to dominate the doubles rankings but there’s little doubt about the team to beat when Venus and Serena are in the draw.

The most famous uncle in tennis, Toni Nadal is also the most prolific coach of a men’s major winner, courtside for all of Rafa’s 13 Grand Slam wins, as well as numerous on-court coaching controversies. Both a tough taskmaster and extremely protective of his nephew’s legacy, Toni’s expression in the box is often the window into Rafa’s mind and game. Not least at the Australian Open final, when Toni’s shake of the head confirmed Rafa was injured, and his hopes of a 14th major win dashed. Family coaching set-ups almost always involve at least temporary splits but after 20-plus years, there has been no sign of rebellion from Rafa.

John McEnroe may scoff at the ‘greatest ever’ tag applying to the Bryans but the 36-year-old Californians are indisputably the most successful team ever. Leading the tally for team titles (93), Grand Slam crowns (15) and seasons at No.1 (nine), their Wimbledon 2013 victory made them the first men’s team in the Open era to hold all four Grand Slam titles, and the first to win all the majors at least twice. With their right-left combination, rangy builds (both over 190cm tall), booming serves and twin telepathy, the Bryans keep the points curt, and hum with urgency and intensity. Next goal: 100 titles together.