UPDATE: Casey Dellacqua's impressive run at the BNP Paribas Open in Indian Wells has come to an end at the hands of No.6 seed Simona Halep. 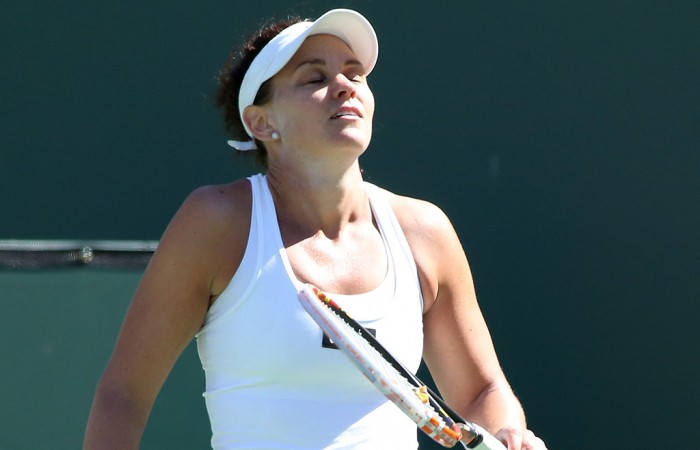 Casey Dellacqua’s impressive run at the BNP Paribas Open in Indian Wells has come to an end at the hands of No.6 seed Simona Halep.

Playing in the second match of Wednesday’s schedule on Stadium 1, Dellacqua fell to the Romanian 6-2 6-2 in exactly an hour.

Halep wrested control of the momentum early, breaking the Australian’s serve in the third game of the match to gain an early lead.

“It was just a whole other level for me. I’ve played two top 20 players this week, and that’s top 20 level, but that top 10 level is definitely another echelon of players. And Simona’s obviously No.7 and a quality opponent,” Dellacqua said.

“I found her base level very tough today. I found her extremely tough off all sides, she served really well and I was a bit hard to find my feet on the court because she was so dominant.”

Despite the loss, the quarterfinal result at the Premier-level event is the best singles result of Dellacqua’s career, and is expected to boost her ranking from No.78 inside the top 60.

Having come through qualifying, Dellacqua won five straight matches in the Californian desert – her sixth came via walkover in the fourth round when American Lauren Davis withdrew prior to the match with a stomach virus.

“I felt really good and I was looking forward to the opportunity to play today and I enjoyed it, and obviously I think Simona was just too good for me today,” she said.

“But at the end of the day I’ve had a really good week and I did what I could today.”

Dellacqua’s doubles campaign also came to an end on Wednesday when she and compatriot Ash Barty fell to top seeds Su-Wei Hsieh and Peng Shuai in the quarterfinals, a repeat of their 2013 Wimbledon final clash.