A healthy, in-form Casey Dellacqua is thrilled with her start to the 2014 season, which has seen her reach her biggest-ever WTA quarterfinal at Indian Wells and return to the world's top 60 for the first time in five years. 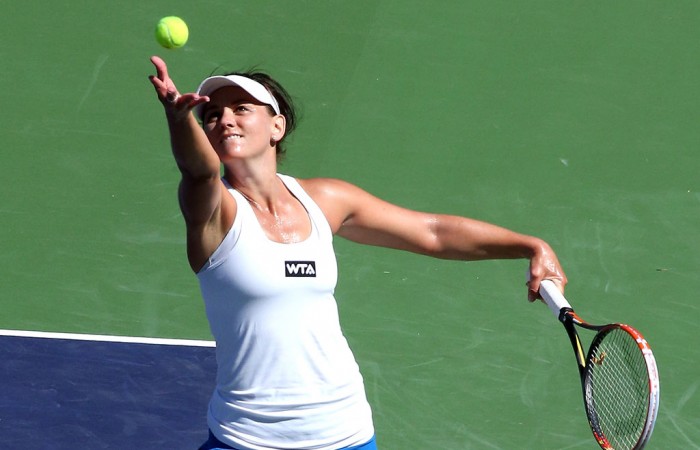 Casey Dellacqua couldn’t be happier with her start to the season.

Despite a disappointing Wednesday in which both her singles and doubles campaigns came to an end in the Californian desert at Indian Wells, the popular Australian has by far exceeded her expectations of where she’d hoped to be at this point of the year.

Having come through two round of qualifying and then storming through to the quarterfinals, Dellacqua is guaranteed to return to the world’s top 60 for the first time in five years.

“I had a goal before the Australian summer started to get back inside the top 100, and I did that, but didn’t re-set any goals but just came here (to Indian Wells) knowing I’d been playing really well,” she said.

“It (this result) sets my year up, I know that I’ll be able to play a lot more big events and I won’t have to play qualifying … So it’s been a really good start to the year.”

Indeed, Dellacqua has positioned herself as one of the in-form players on the WTA in the past couple of months.

Having in January reached the fourth round of the Australian Open – equalling her best-ever Grand Slam singles performance – her trip to the quarterfinals at Indian Wells represented her career-best result at a WTA event.

Her season win-loss record already stands at 11-4, and provided she stays healthy, she stands to rise even higher given she has very few ranking points to defend for the rest of the season.

Yet she had the misfortune of running into an even more in-form player on Wednesday in Simona Halep.

Serena Williams aside, Halep has been the hottest player on tour in the past 10 months, winning seven titles, 58 matches and rising from outside the top 60 to a career-high ranking of world No.7.

“She turns defence into offense very quickly and very well. (Despite her reputation as a counterpuncher) I would even say she’s an offensive player. I think she’s quite aggressive, and she likes to dictate and she does it well, but she plays defence really amazing so that’s why she’s so good really.

“I found her base level very tough today. I found her extremely tough off all sides, she served really well and I was a bit hard to find my feet on the court because she was so dominant.

“But it’s good for me, it’s good to play matches like that and good to see where I’m at and see where I can keep improving.”

This may be her 12th season as a pro, yet constant improvement is something that has marked Dellacqua’s game.

Six years ago, she rose to her career-best ranking of No.39, yet it’s a far more experienced, fit and mature player who takes to the court in 2014.

It’s also a healthier one. After losing the best part of two full seasons during 2009 and 2010 due to debilitating shoulder and foot injuries, she’s feeling better than ever. And that’s even with the dual workload of singles and a flourishing doubles partnership with young compatriot Ash Barty.

“The body’s been great so, yeah, I feel really good with where I’m at,” she said.

“Obviously I’ve had a lot of tennis and I’ve played doubles as well, so my days (in Indian Wells) have been really busy. But that’s what I want to be, I want to be busy rather than not playing.

“The year has started off amazing. I’ve put priority on both singles and doubles, I really want to do both events really well. That takes a lot of effort in terms of keeping your body right but it’s what I want to do and I want to make the most out of these last however many years I’ve got playing.

“There’s just so many positives to come out of this week. I’m really chuffed with where I’m at and how much hard work I’ve put in and that the results are starting to pay off.”