Australia will pick the brain of young gun Ashleigh Barty as they prepare to take on a team of unknown Russians in the Fed Cup's first round. 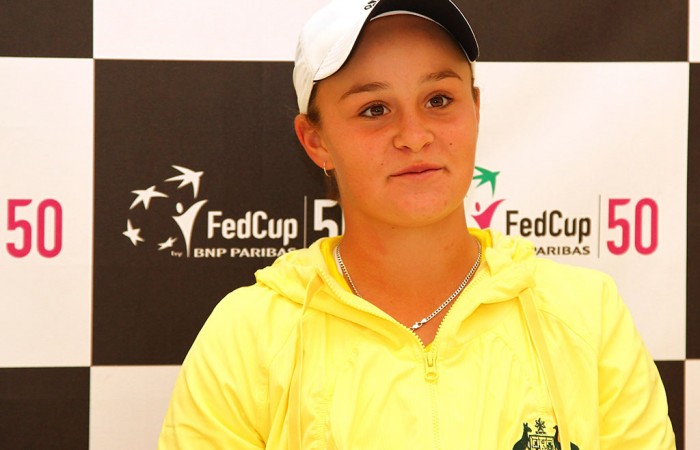 Australia will pick the brain of young gun Ashleigh Barty as they prepare to take on a team of unknown Russians in the Fed Cup’s first round.

With team captain Alicia Molik admitting she has next to no footage of the young Russians, Barty has the most experience of Australia’s opponents after coming up against them in junior tournaments.

The 17-year-old beat beat world No.241 Irina Khromacheva in the junior Wimbledon final in 2011.

“I know the girls a little bit better than (Australia’s other team members),” Barty told reporters on Wednesday in Hobart ahead of the weekend tie.

“I’ve played a couple of them in juniors.

“It’s been a while since I’ve played them but I think we can kind of use that information as a team and try and get the best strategy to play them.”

Molik said she would be tapping into Barty’s knowledge as well as watching the Russian practice sessions at the Domain Tennis Centre.

She said she’d only been able to track down video footage from several years ago.

“They’ve obviously chosen a young team, a team that’s really developing and I’m sure they’re developing at a great rate.

“We’ve managed to see a little bit but not a hell of a lot.”

Australia cannot afford to take the Russians lightly, Molik said, but the team can take confidence out of the performances over summer.

“What we do have on our side is a lot of experience,” she said.

“The Australian team have had a large number of matches split between them over the summer so you’ve really have to back yourself.

“You have to back the numbers next to your name.”

Molik said she was still deciding on Australia’s singles and doubles make-up.