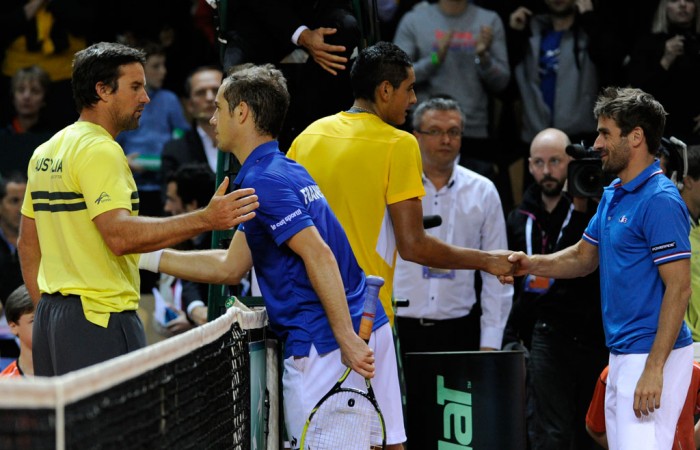 Asked about the growing hype surrounding the powerful Kyrgios, who has already won two Grand Slam matches, Gasquet said it was justified.

“His size also, he’s very tall [195 cm], his serve is wonderful and his forehand stroke is gigantic.

“If he works hard, and if he continues on this path, he will be in the top 10.

“He is actually capable of winning big tournaments because he plays very well.

“He’s got a great attitude and a wonderful personality. I think he will be a prominent player in the future.”

Told of Gasquet’s comments, Kyrgios said it was nice to hear from a player he respected so highly.

“But there’s still a lot of hard work that needs to be done,” Kyrgios said.

“But I can still draw a lot of confidence out of today.”

Australian captain Pat Rafter felt Kyrgios’ performance showed he still had plenty of development ahead of him.

“Nick showed some really good promise in the first set … but his game was not able to keep at that high level to stay with Gasquet,” Rafter said.

“I think it’s a really great learning experience for Nick.”

Krygios won his first Grand Slam match on debut at last year’s French Open but truly captured the public’s imagination during the Australian summer, when he suffered a five-set loss to seeded Frenchman Benoit Paire in the Australian Open second round.

He could get another taste of Davis Cup on Sunday, when he is scheduled to contest the reverse singles.