Bradley Mousley is into the quarterfinals of the boys' Australian Open after blasting his way to victory in straight sets at Melbourne Park today. 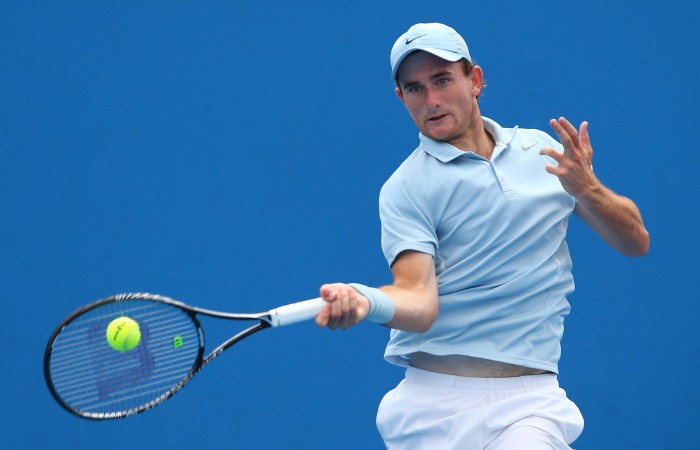 Best mates with boom youngster Nick Kyrgios, South Australian Brad Mousley is also looking to make a name for himself at the Australian Open.

Mousley watched as Kyrgios earned a new swag of fans when he almost toppled French 27th seed Benoit Paire in the second round of the men’s event.

Mousley is content to play in the juniors at the moment and is looking at a busy week after reaching the quarter-finals in both the singles and doubles.

The 18-year-old is now the last local hope in the boys’ singles tournament.

He will face Polish ninth seed Kamil Majchrzak in the final eight.

“I’m just trying to improve in each match and stick to my game which is more attacking and not let other people suck me into their games,” Mousley said.

The teen has played many years with Kyrgios and fellow rising star Thanasi Kokkinakis.

He wasn’t surprised with the way they lined up against elite players in the Open.

“I’ve known Nick my whole life and Thanasi and I have trained together since I was about 10.

“I haven’t been surprised because I know that they both have big games and a lot of talent.”

Mousley said he couldn’t help but compare himself with that duo, who are now part of Australia’s Davis Cup team, and didn’t think he was too far off.

“I would like to think that I can get there as well.

“With my best tennis, I think that I can match up with their best tennis as well but they’re a bit more consistent at the moment and that’s what I’m trying to find in my game.”

This year, he has teamed with Austrian Lucas Miedler, with the duo ousting second seeds Russian Andrey Rublev and German Alexander Zverev 6-4 7-6 (7-3).