Bains breezes into third round of junior Australian Open

Naiktha Bains steamed into the third round of the girls’ singles like an express train today at the 2014 Australian Open with a 6-2 6-2 win over Russian Anastasia Shaulskaya. 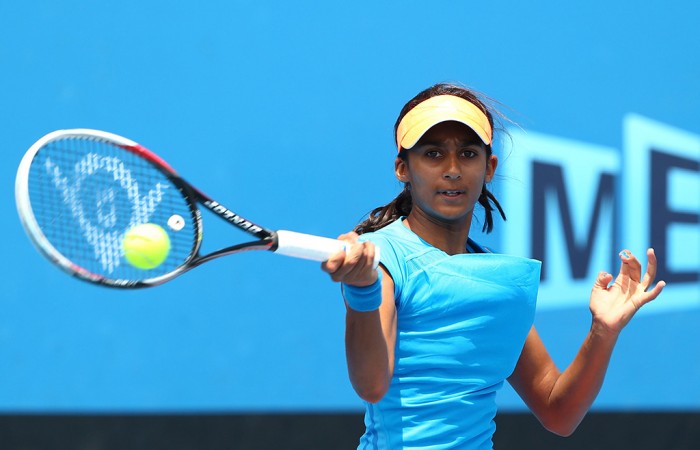 Naiktha Bains steamed into the third round of the girls’ singles like an express train today at the 2014 Australian Open.

Her second-round 6-2 6-2 win over Russian Anastasia Shaulskaya took just an hour and seven minutes, which is six minutes less than her first round 6-2 6-1 trouncing of Japan’s Shiori Fukuda took.

Bains hit no less than 26 winners en route to the emphatic victory.

“I played well today, it was good.” The unassuming 16-year-old said after the match.

Despite being faced with a serve encroaching on 180km/hr, Bains dominated from the outset, winning the first four games of the match.

“I found she served better to second court, she served out wide there and aced me a couple of times, but after a while I kind of read where it was going.

“The pace isn’t an issue once you can see where it’s going.”

It has been a stellar start to the year for Bains. She made the quarterfinals of qualifying at the Hobart International senior event where she lost to the eventual tournament winner, Garbine Muguruza. Muguruza also went on to reach the fourth round of the Australian Open, losing to Agnieszka Radwanska last night on Rod Laver Arena.

“She has done really well, she ended up winning the tournament in Hobart and just lost to Radwanska yesterday, it was a good experience for me to play against her.”

The early-season experience against the seniors is something that Bains says she can call on in the junior tournament, provided she maintains the level of play that she did in those matches.

“The pro’s is a step-up; obviously some of the juniors aren’t up to that level yet.”

“I’ve got to play as I would against the seniors to get on top of these juniors, they can be tricky at times.”

Bains tasted great success in junior doubles in 2013 and plays her second-round Australian Open match later today with partner Olivia Tjandramulia. She says the doubles accomplishments are something that has assisted her singles game.

“Doubles helps you in singles a lot so it’s good that I’m doing well in doubles too.”

Awaiting Bains in the third round is the tournaments sixth seed, Jelena Ostapenko from Latvia. While the pair haven’t met, Bains says she does have some idea of what her opponent is capable of.

“I haven’t played her before but I know her from being around her in tournaments.

“I have a little bit of an idea of what to expect tomorrow.”