Seeded teams prove too strong day one of Playoffs 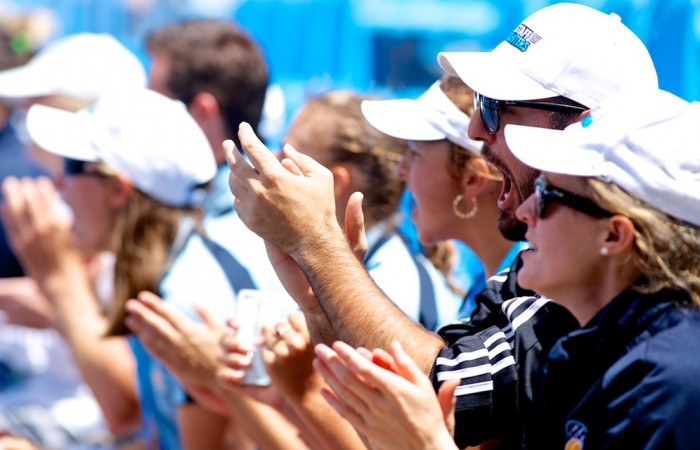 The 2014 Asia Pacific Tennis League got off to a cracking start at Melbourne Park. Everyone was certainly in for an action packed day of tennis.

Starting off play at 11am we saw The New Zealand Kauris take on the Wembley Downs Wizards. The Wembley Down Wizards went into this match with nothing to lose taking on the number 4 seeds. The New Zealand Kauris unfortunately proved too strong, with a six rubber to love victory.
Canberra Velocity seeded number 4 for the ATL finals went into the match against Korea confident after recruiting South Africa’s number 1 player Chanelle Scheepers. The Korean team however had other things in mind. With all the Korean girls ranked inside the world’s top 800, Canberra were in for a tough day. In the end team Korea proved too consistent for the Velocity with a four rubber to two win.
The Flagstaff Freighters are a team to watch at the playoffs, especially with their Wild Card recruit of Polish world number 120 Madge Linette. The Shaw Park Sharks went into this match as the underdogs, but put up a fight. Despite a slow start the Flagstaff Freighter held on for a four rubbers to two win.

Women number 1 seeds RSY Royals went into their first round match of the playoffs against New Zealand Tuis, as clear favourites especially with Wildcard recruit Olivia Rogowska. The depth of the Royals is one to be commended, with Rogowska at one, Sanders at two, Patterson at three, and Hadzic at four. They stated themselves as the ones to beat, and wasted no time disposing the NZ Tuis five rubber to love.
Kooyong Classics seeded number 3, were taking on Canberra Velocity. Velocity without the likes of Krygios and Bolt, were confident they didn’t want to follow the same feat as their female compatriots earlier in the day. The Velocity put on a fight, but in the end it wasn’t their day with The Kooyong Classics, showing experience and professionalism winning the tie four rubbers to two.
Japan Pheonix, are the clear favourites of the Finals playoff with Bobby Reynolds, and Danai Udomchoke headlining the Pheonix Team. They proved too strong for the Trinity Titans with a five rubbers to love victory. The Japan Pheonix are definitely the team to watch.

Number 2 seeds of the competition Stanmore Wyverns took on the young gun team the Midland Maddogs. The Wyverns without the likes of Dellacqua and Adamczak in singles, had to step up to make sure they didn’t have an early exit. The likes of Mladin, Boyanov, Svinos and Moriarty stepped up to the challenge and comfortably disposed of the Midland maddogs 5 rubber to 1.
Tennis Brisbane Chargers seeded number 2, went in as favourites against the Pacific Oceania Dolphins. Being the second year the dolphins have come across to compete in the ATL finals, their initial experience of the format last year the Dolphins were back to try and improve their performance from last year, however went down against an experienced chargers team. The chargers were too strong and took out the tie four rubber to two.