Dellacqua’s Open over but not her rise 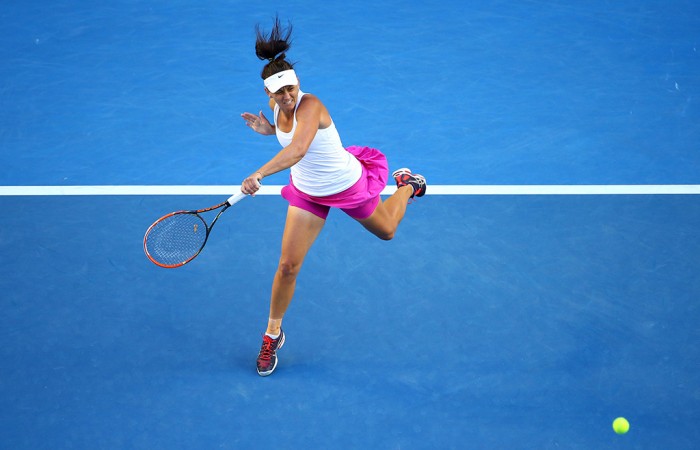 Casey Dellacqua’s Australian Open is over but her late-career resurgence is just getting started.

That’s the Australian 28-year-old’s assessment after being knocked out of the Open in the fourth round by fast-rising Canadian teenager Eugenie Bouchard on Sunday night.

Bouchard, 19, started last year as the world No.144 before shooting up the rankings to earn a spot as the Open’s 30th seed.

Playing in the fourth round of a major for the first time, she showed composure beyond her years to notch a comeback 6-7 (5-7) 6-2 6-0 win over Dellacqua.

She’ll play Ana Ivanovic in the quarter-finals, after Ivanovic upset world No.1 Serena Williams earlier in the day.

Both Dellacqua and Bouchard were seeking to chart new career territory, and the nerves showed early, with both making errors to give up breaks of serve before the Australian steadied to win the first-set tiebreak.

But once the hard-hitting Canadian teenager found her rhythm, she piled the pressure on Dellacqua to control the second set and dominate the third.

Dellacqua was predictably disappointed but exited the singles event with $135,000 prizemoney and, more significantly for her, a firm belief that a mountain of hard work on her fitness and form in recent months is paying off.

Her ranking will jump from No.120 to double figures

Her confidence has soared at least as much.

“It’s finding that belief within yourself that I can beat those girls,” Dellacqua said.

“I think that’s a really big thing in our sport.

“So probably if I can take one thing away from the last month of tennis, not even just here, but from Brisbane, Hobart and here, it’s that I can beat girls like this.”

It comes just three months after Dellacqua had a heart-to-heart conversation with coach Shannon Nettle, after bombing out of the US Open in the first round, to decide how dedicated she was to reviving her slumping singles career.

By reaching the fourth round, Dellacqua matched her previous best major performance, having reached the same stage of the 2008 Open.

Since then, she has had to overcome career-threatening foot and shoulder injuries.

Dellacqua said this time she felt much better prepared to capitalise.

“I’m older, I understand where I’m at with my game.

“In ’08 I was playing good tennis, I got to 39 in the world, but I was struggling with injuries. It was a tough year for me.