Australian Casey Dellacqua's hot Australian Open run has ended in the fourth round at the hands of fast-rising Canadian teenager Eugenie Bouchard. 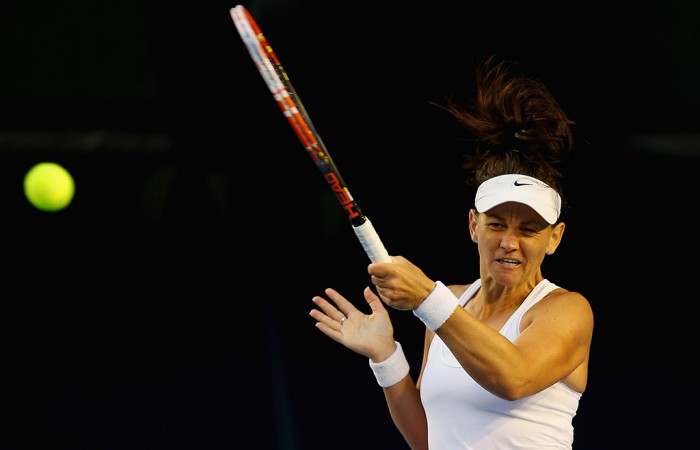 Australian Casey Dellacqua’s hot Australian Open run has ended in the fourth round at the hands of fast-rising Canadian teenager Eugenie Bouchard.

Dellacqua had already equalled her career-best grand slam performance – having also made the round of 16 in Melbourne in 2008 – but looked set to go a step further when she took a tense opening set.

But Bouchard, who had never before played in the tournament reached the fourth round of a major, overcame early nerves to dominate from then on and and book a quarter-final date with Serbian star Ana Ivanovic.

While Dellacqua’s Open has ended, and with it Australia’s presence in the men’s and women’s singles draws, the 28-year-old will be hoping it’s just the start of a late-career resurgence.

Since reaching the same stage in 2008, Dellacqua has had to battle her way back from career-threatening foot and shoulder injuries to earn the chance to push herself back to the same heights.

With both women having entered the match seeking to break new career ground, their nerves were evident early.

Dellacqua picked up an early break, clinched by a horror Bouchard error, when the Canadian badly misjudged a looping Dellacqua forehand and failed to swing at it as it landed inside the baseline.

The Australian gave the break back in the eighth game, delivering the Canadian break point with a pair of soft forehand errors, followed by a wayward backhand to seal the break.

The tiebreak was similarly tension-filled, with a series of forehand errors from Bouchard handing Dellacqua two set points.

She squandered the first.

But Dellacqua played cleverly on the second, delivering a mixture of slice, lofted balls and flat strokes from the baseline before the Canadian eventually coughed up the set with another misplaced forehand.

But the hard-hitting teenager found her rhythm to force the pace in the second set and Dellacqua’s game faltered, the Canadian ripping through five games in succession on her way to levelling the match.

With Bouchard’s confidence rising and Dellacqua’s unforced error count soaring, the Canadian made even quicker work of the deciding set, conceding just 10 points.

Bouchard said she didn’t find it hard to stay composed after going a set down in a big match, despite her youth and inexperience.

“I guess it does come a bit naturally, but I just try to stay calm and focus on what I need to do in the point – being aggressive and things like that,” she said.

She was looking forward to taking on Ivanovic.

“She played really well. She was being really aggressive so I’m going to look forward to being aggressive as well.”

Dellacqua said while disappointed to lose, she was proud of what she had achieved in the tournament and it had given her a valuable confidence boost.

“Probably in the past I’ve struggled with that belief that I can beat a lot of those players,” she said.

“I think it’s finding that belief within yourself that I can beat those girls. That’s a really big thing in our sport.”