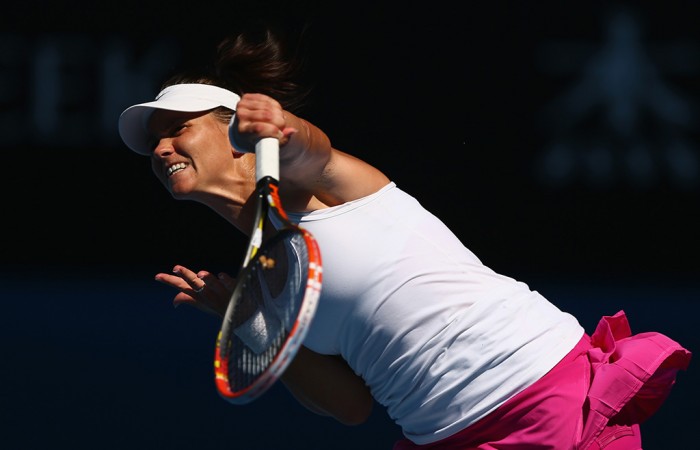 After losing almost two years to career-threatening foot and shoulder injuries, Dellacqua was the last Australian standing at Melbourne Park.

The 28-year-old attributes her dream run to the second week of the Australian Open to a relentless off-season training regime engineered by esteemed conditioner Giselle Martin.

Formerly guiding Martina Navratilova, Monica Seles and Samantha Stosur, Martin has whipped Dellacqua into the best shape of her career with a demanding summer routine featuring everything from track work to sand dune climbing and bounding up all 234 steps of the famous Coogee stairs in Sydney’s eastern suburbs – over and over again.

Then there’s the dreaded run-swim-runs at Clovelly Beach.

“And she does those with shoes on,” Martin told AAP.

“You want different stuff. You get out of the water and run around the park, up the hill, past the rocks and then back in the water again.

But it’s all paying off, with Dellacqua racking up a succession of victories over higher-ranked rivals, including 2013 Wimbledon semi-finalist Kirsten Flipkens, at Melbourne Park.

“I definitely feel like a different person, a different player at this point in my career,” Dellacqua said ahead of her fourth-round showdown with Canadian Eugenie Bouchard on Sunday night.

“I’m feeling like I’ve just been rewarded for all the work I’ve done pretty much.

“I have a lot more self belief. That probably comes from doing the hard work off the court, to be able to take that into matches, knowing I’ve done the work.

“I deserve my spot. I deserve to be playing in these matches.”

Martin, whose husband Nathan has worked similar magic with Lleyton Hewitt following his career-saving foot surgery two years ago, agrees that Dellacqua’s best years in tennis are still to come.

“She wants to have a real crack at singles and, if she continues being smart, she’s definitely got four or five more years,” Martin said.

“There’s no doubt she’s where she is now because she’s been able to have a full and proper off-season for the first time in years.

“She had that foot operation, that shoulder operation. It’s been never-ending injuries for her.

“But now she’s definitely the fittest she’s ever been.”