Samantha Stosur is targeting a swift return to the world's top 10 and another tilt at French Open glory after having her Australian Open campaign ended prematurely once again. 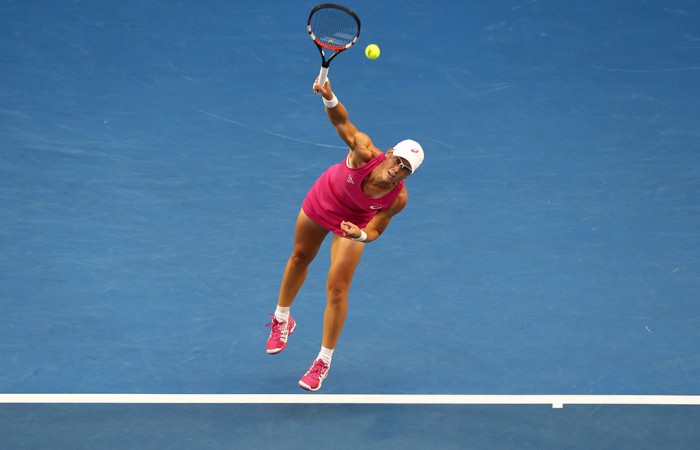 Samantha Stosur is targeting a swift return to the world’s top 10 and another tilt at French Open glory after having her Australian Open campaign ended prematurely once again.

Stosur was feeling upbeat despite blowing a one-set lead for the first time at Melbourne Park in her 6-7 (8-10) 6-4 6-2 second-round loss to former Open runner-up and world No.1 Ana Ivanovic.

The 2011 US Open champion admitted she’d been powerless to stop Ivanovic in full flight, but was heartened to have produced some of her best tennis in front of home fans after years of sub-par performances.

“The last couple of games where she broke me, she played unbelievable.

“It’s better when you don’t feel like you beat yourself … I’m pleased with the tournament.

“It’s obviously disappointing I couldn’t go further. But I thought I played well.

“I thought each match I got better. There’s certainly lots of positives I can take from this first few weeks of the year going into the rest of the year.”

Currently ranked 17th, Stosur can expect to climb a couple of spots on Monday and is intent on cracking the top 10 by May to gain a decent seeding for Roland Garros.

A top-eight seeding will ensure Stosur doesn’t run into a Williams, Azarenka or Sharapova or the like until at least the quarter-finals on her beloved Parisian clay.

“But you don’t get there without winning lots of matches and working hard. So you’ve got to put all those little things into place first.

“Probably this year I’ve got to try to do a bit better in these bigger tournaments – grand slams – where there’s a lot more to gain.

“Hopefully I can peak at those right times this year.”

At 29, the 2010 Roland Garros finalist believes her best tennis is still to come in an era where 30 seems the new 20.

“I’m looking forward to it. Yeah, I’ve got no reason to think that I can’t keep getting better. Hopefully that will show.”