Casey Dellacqua is promising to "leave it all on the line" as she chases a $300,000 cash bonanza and maiden grand slam quarter-final berth at the Australian Open. 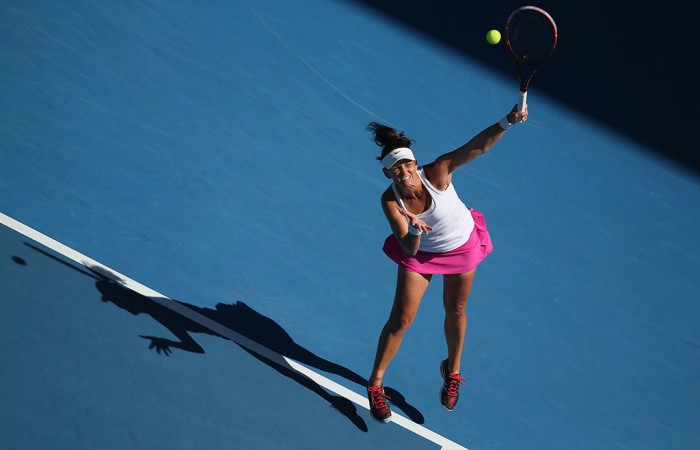 Free-swinging Casey Dellacqua is promising to “leave it all on the line” as she chases a $300,000 cash bonanza and maiden grand slam quarter-final berth at the Australian Open.

Australia’s last hope in the singles, Dellacqua takes on classy Canadian teenager Eugenie Bouchard in the fourth round on Sunday and admits the huge prize money up for grabs is impossible to ignore.

And the new mum said it would be a welcome collect after several injury-plagued years trying to make ends meet.

“A lot of the girls out there are either travelling by themselves or without coaches.

“It’s an expensive sport for yourself, not to mention to travel with entourages and stuff, unless you are in that top calibre of players.

“I’ve been ranked 150 to 180 for the last year. It is tough. You’re worrying about money. You’re trying to survive each week. There’s not a lot of money for players ranked from 150 to lesser.

“Yeah, it’s a bit of a grind. I’ve been in both kind of areas. I’ve been in the lower level. Even eight months ago, I was playing a couple 50,000 (dollar tournaments) in Bendigo.

“You’re paying for your hotel, nothing gets paid for, and you’re not making much money.

“But that’s what you do to get to these moments. But it’s tough.”

Apart from a rankings rise from 120th in the world to at least the top 80 – meaning direct entry to the remaining three grand slams of the year – Dellacqua is already guaranteed a cheque for $US150,000 ($A170,000) for her first week’s work at the Open.

But it’s an elusive first grand slam quarter-final spot in her 24th career major that the West Australian covets most.

“Singles is my priority,” Dellacqua said.

“When I get to play in the fourth round, I guess I’ll leave it all on the line again.

“My body feels great. I’ve been doing all the recovery and stuff. Hopefully I can keep my roll going and have another win.”

Only 19, Bouchard is enjoying an impressive Open debut after storming up the rankings to No.31 in the world.

“I know it will be tough against Eugenie,” Dellacqua said.

“So I just look forward to another opportunity, another challenge.”