Samantha Stosur has endured Australian Open heartbreak as she slid to defeat against Serbian former world No.1 Ana Ivanovic. 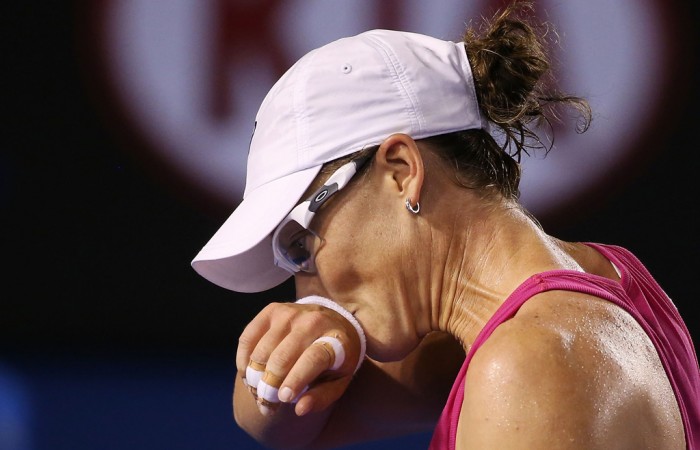 Samantha Stosur has taken heart that she didn’t snap under the pressure of playing at home, even though another Australian Open campaign has ended sooner than she hoped.

It was the third time in as many attempts the 2011 US Open champion has fallen short of the quarter-finals in her home grand slam.

But it was the first time Australia’s top-ranked player has lost at Melbourne Park after winning the opening set.

Stosur, who has admitted to struggling with the weight of expectations in her home major previously, said this time she was just beaten by an opponent who played better on the night.

“You never like losing no matter what circumstances,” she said.

“But if you’re going to lose, for sure it’s better when you don’t feel like you beat yourself and you kind of did things that you know you shouldn’t.

“So, yeah, I’m disappointed, but I can still look back on that match and think that I played well and got beaten by a good player tonight.”

She said she could still use the Open as a springboard for her year.

“There’s certainly lots of positives I can take from this first few weeks of the year,” Stosur said.

Ivanovic, a 2008 Open finalist and the 14th seed, will take an eight-match winning streak into her fourth-round clash with world No.1 Serena Williams, but admitted she would have to raise her game to another level.

“It’s going to be a very tough task,” she said.

“But I look forward to that challenge. I’ve been playing some good tennis all summer, it’s going to be nice test to see where I’m at.”

Stosur, who has reached the fourth round just twice, in 2006 and 2010, pushed Ivanovic hard.

The Australian needed seven set points to claim a dramatic opening set, which stretched to more than an hour-and-a-half, including a 27-minute rain interruption at a crucial stage of the tiebreak.

When Stosur eventually clinched it, moments after returning to court, it seemed a pivotal moment.

But the match quickly swung the Serb’s way.

Ivanovic broke serve in the fifth game of the second set.

And while she needed two set points to serve out that set, the Australian helped her out on the second of those with a forehand error.

The momentum swung even more firmly the Serb’s way when she won eight of the first nine points of the deciding set to race to a 2-0 lead.

While Stosur tried desperately to break back, when she netted a forehand to drop another service game and fall to 5-2 it was effectively over and Ivanovic served out the match in style.