Jelena Dokic says she's starting from zero as she continues her tennis comeback through the women's doubles at the Australian Open. 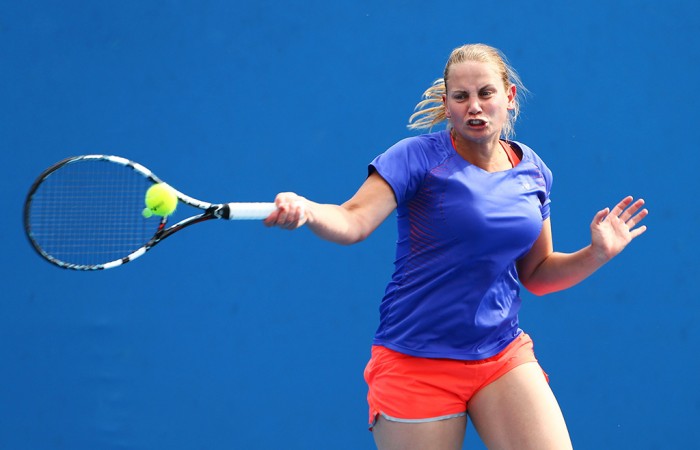 Jelena Dokic says she’s starting from zero as she continues her tennis comeback through the women’s doubles at the Australian Open.

The former world No.4 fell short in her quest for a singles wildcard at this year’s and turned out in the doubles with fellow Australian Storm Sanders.

They lost their round-one clash at Melbourne Park against Slovakian Magdalena Rybarikova and Swiss Stefanie Voegele 6-4 6-4.

The 30-year-old is trying to revive her career after two long years out following surgery on a troublesome wrist and the viral infection mononucleosis.

Much has changed since her heady days in the top 10, reaching the semi-finals at Wimbledon and the Sydney Olympics.

But the topic of her father and former coach Damir, who was banned from the WTA tour, is still off limits.

Dokic knows the road back will be long and hard but doesn’t want to stop trying.

“It’s frustrating that I have to start from zero,” she said.

“But I have the motivation to do it and, as long as that’s there, I’m going to play.”

Dokic admits she’s still well short of full fitness but believes she has not lost the ability to make an impact.

“I wouldn’t be out here now if I didn’t have the ambition to play singles; I’m not going to go out and just play doubles,” she said.

She’s based in Melbourne, working with former doubles specialist Todd Woodbridge as her part-time coach.

Because of her injury, Dokic can activate a special protected ranking that she can utilise for eight tournaments this year, but won’t do so until she’s ready.

“Regardless of what my ranking was, I would still play Challenger tournaments because I haven’t played for such a long time.

“It wouldn’t be smart to go into WTA events.”

She isn’t contemplating life without tennis just yet.

“I haven’t thought about what I might do after tennis. I’m still at the playing stage so it’s not my focus.”