Kokkinakis gets lesson from Nadal

Aussie tennis teen Thanasi Kokkinakis says he got a lesson in what it takes to get to the top from world No.1 Rafael Nadal in their Australian Open round-two clash. 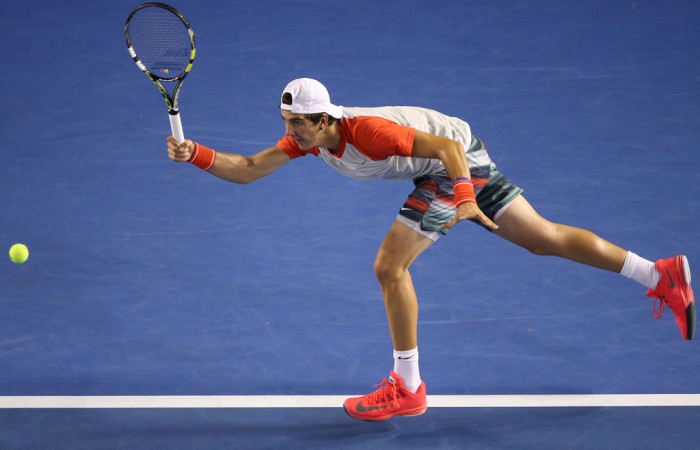 Aussie tennis teen Thanasi Kokkinakis says he got a lesson in what it takes to get to the top from world No.1 Rafael Nadal in their Australian Open round-two clash.

Kokkinakis lost in straight sets 6-2 6-4 6-2 on Thursday but won a fan, with Nadal saying the 17-year-old he had the potential to be an elite player.

“He has fantastic potential,” Nadal said.

“He has a great serve and a great forehand – all the ingredients to be a fantastic player.”

Nadal ripped 16 winners and only made three unforced errors in a sizzling opening set that served as warning to other contenders after he missed last year’s Open through injury.

He will face Gael Monfils in round three after the Frenchman beat American Jack Sock 7-6 (7-2) 7-5 6-2 on Thursday night.

South Australian Kokkinakis, who was making his grand slam debut, described the Spaniard as a “beast” and was in awe of his physicality.

“Physically, it’s the thing I need most to improve,” he said.

“I’ve got a way to go to get that strong and fit.”

He felt good once he got into a rally with Nadal, but admitted he was troubled by his serve.

“Although it’s not huge power it’s definitely difficult to return.”

Nadal made his Australian Open debut also as a 17-year-old, losing a tight three-setter to Lleyton Hewitt in the third round.

He felt Kokkinakis was part of the next generation of tennis stars to emerge.

“He has a great future he has the right level to be on the tour very soon, just keep working and that will happen,” Nadal said.

Kokkinakis was thrilled that a player he had long admired had given him such encouragement.

“He’s obviously a legend of the game and for him to say that is a real big plus for me.

“I’ve got a lot of development to do and I just need to keep working.”

The Australian Open and US Open junior runner-up last year, he said he was done with juniors and wanted to play with the “big guys”.

He will join Australia’s Davis Cup squad camp following the Open and travel with the team to France next month.