Tomic out for up to three weeks

While scans have confirmed bad news for Bernard Tomic, it could have been a whole lot worse. 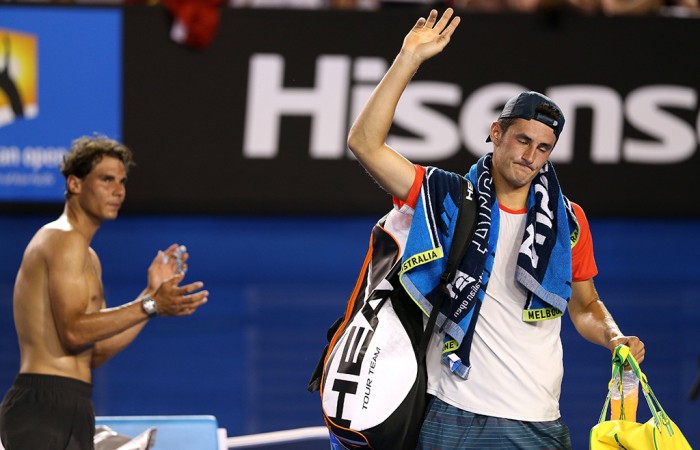 While scans have confirmed bad news for Bernard Tomic, it could have been a whole lot worse.

Tomic has a small tear in his adductor longus, a muscle in the groin region. The injury will see the 21-year-old sidelined for up to three weeks.

But, as Tomic explained in Melbourne today, had he continued his match with world No.1 Rafael Nadal last night, he could have been forced out of the game much longer.

“If I had played on it, it would have been 10 times worse, they say, so I could have been out potentially for three, four months,” Tomic said.

“I’m very happy I stopped.  It was the right call.”

One of the driving reasons behind Tomic’s press conference today was to alleviate any misunderstanding between the public and himself.

The initial reaction to Tomic’s retirement during last night’s match was slightly less than favourable from certain sections of the crowd, which is something that Tomic wanted to clear up.

“I think it’s important for me to come out like this. A lot of people showed up last night, you know, expecting a very good match. A lot of people paid their tickets. It’s disappointing for that to happen.

“I think I was misunderstood.

“They thought I was shaking Rafa’s hand because he’s too good and I’m forfeiting the match because I can’t play against him.

“I don’t think they quite understood that it was my leg.”

Rehabilitation is the priority now for the wounded Tomic as he looks to get his season back on track.

“I have to treat it as much as I can because I have Davis Cup coming along, and it’s important for me.”

Tomic’s availability for that Davis Cup tie against France at the end of the month hangs in the balance and could play a major factor in Australia’s hopes in the tie.

“Right now probably not looking good, which is a shame.

“It’s a very important tie for us.  You know, we’ve got to take on Gasquet and Tsonga on clay.”