Stosur storms into third round of Australian Open

Samantha Stosur has enjoyed a saloon ride through to the third round of the Australian Open, downing wounded Bulgarian Tsvetana Pironkova 6-2 6-0 in barely an hour. 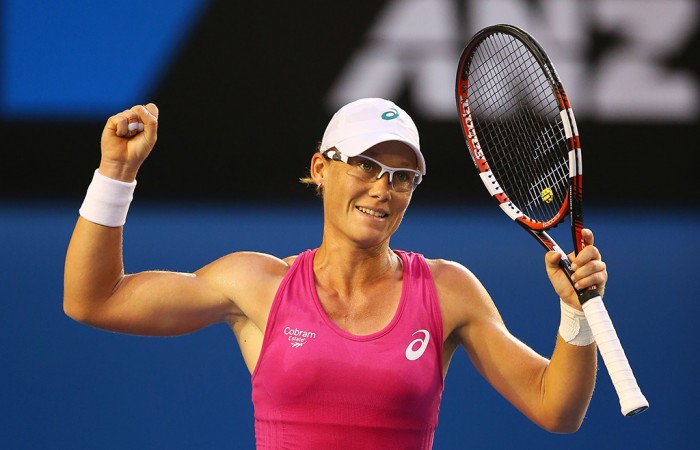 Samantha Stosur has enjoyed a saloon ride through to the third round of the Australian Open, downing wounded Bulgarian Tsvetana Pironkova 6-2 6-0 in barely an hour.

Pironkova had been on a nine-match winning streak, but was no match for Australia’s 17th seed after taking a medical time-out for a leg injury after dropping the opening set.

Even after having her left thigh strapped, the newly-crowned Sydney International champion was unable to move freely and barely challenged Stosur.

Stosur’s cruisy win thrust her into the third round at Melbourne Park for the first time since winning the 2011 US Open.

The 17th seed next faces either Serbia’s former world No.1 Ana Ivanovic, the 14th seed, or German Annika Beck on Friday for a spot in last 16.
Pironkova was expected to trouble Stosur after entering their second-round contest in the form of her life.

The 25-year-old knocked over three top-eight stars in marching to the Sydney title from qualifying last week.

But the heavy workload of eight matches in nine days – plus a first-round victory in Melbourne – ultimately took its toll on the one-time Wimbledon semi-finalist.

Stosur broke her twice to take the first set in 39 minutes and then won 13 successive points at the start of the second.

The world No.57 must have known defeat was inevitable but gallantly played on, perhaps mindful that the Rod Laver Arena crowd were short-changed the previous night when Bernard Tomic retired after just one set with a groin tear.

Pironkova won just eight points in total in the second set before Stosur put her out of her misery after 64 uncomfortable minutes on court.