Kokkinakis set for his clash with Nadal

Thanasi Kokkinakis has set up a second round date with world No.1 Rafael Nadal. But the 17-year-old is taking it all in his stride. 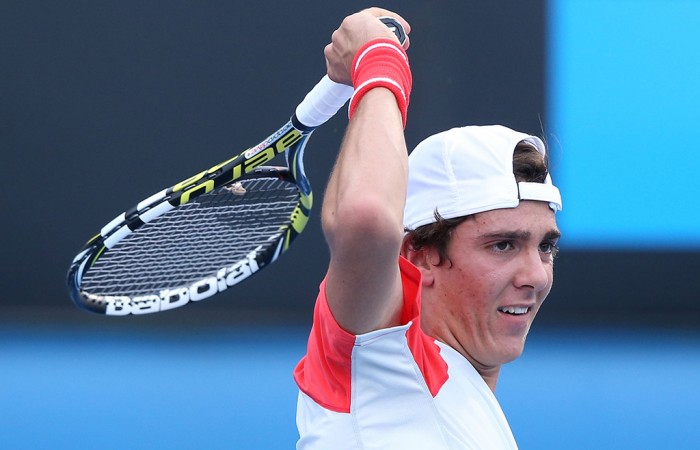 You could be excused for thinking that Thanasi Kokkinakis had been on the ATP tour for years.

A charismatic post-match lap of honour that saw Kokkinakis high-five anyone and everyone that wanted to in Show Court 3, was a highlight that complimented his nine aces and 54 winners superbly.

The win sees Kokkinakis set up a second round clash with world No.1 Rafael Nadal.

But like everything that has been asked of Kokkinakis thus far, it is likely to be just another thing the sharp-witted youngster takes in his stride.

A relaxed and jovial Kokkinakis was in his element at his maiden post-match press conference.

Kokkinakis exudes confidence in a quaint fashion that makes it look like he’s been through it all before, almost like he has found his calling.

He pulls no punches when it comes to his approach to the big clash with the world No.1.

“I’m looking forward to the challenge.”

A recent clash with Lleyton Hewitt at the Brisbane International is something that Kokkinakis feels will help him deal with the occasion on Rod Laver Arena.

“I think I’ve had a couple good experiences, qualifying in Brisbane playing Lleyton on that big centre court there.

“I think it was all a good experience for me, just build up to play these moments.”

A player of Nadal’s stature could be excused for not knowing a lot about Kokkinakis, but the Spaniard supplied a glowing reference for his upcoming opponent.

“He has a great future and will be a very tough match for me if I am not able to play my best,” Nadal said.

“I going to try to play well.”