Stosur into Australian Open second round

She knows one swallow doesn't make a summer, but that didn't stop Samantha Stosur from breathing a big sigh of relief after safely progressing to the second round of the Australian Open today. 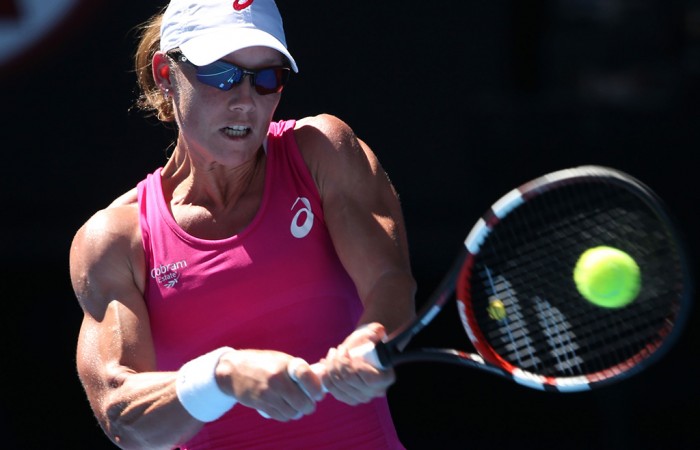 She knows one swallow doesn’t make a summer, but that didn’t stop Samantha Stosur from breathing a big sigh of relief after safely progressing to the second round of the Australian Open on Monday.

Just three days after suffering a straight-sets hiding from Klara Zakopalova in Hobart, Stosur exorcised some demons with a hard-fought 6-3 6-4 victory over the dangerous Czech at Melbourne Park.

Lumped with the burden of being Australia’s only seed in this year’s singles events, Stosur rallied from 4-1 down in the second set to advance after one hour and 32 minutes battling temperatures in excess of 30 degrees in Rod Laver Arena.

“It’s a relief,” Stosur said. “The first hurdle is quite often the hardest.

“To come out and play, play a pretty decent match, I’m very pleased obviously … very happy to get through and obviously rectify what happened a few days ago. First one’s down.

“It doesn’t mean I’m looking further ahead. I have to focus on this next match and take my second round just as seriously, just as importantly.

And so she should.

The world No.17’s atonement set up a second-round confrontation on Wednesday with Tsvetana Pironkova, the in-form Bulgarian who racked up eight straight wins – including three top-10 scalps – en route to the Sydney International title last week.

Heatwave conditions of more than 40 degrees are forecast for Wednesday, but Stosur isn’t swaeting.

“I don’t usually struggle in the heat, so that’s fine,” she said.

“I practised here through December. There was some pretty hot days in Sydney. Got through those all right.

“Tournament play is always that little bit different. If you do all the right things, try to stay hydrated, look after yourself, hopefully by the time you get out on court, you won’t have any problem.

“Touch wood, that will be the same for me.”

The 2011 US Open champion dropped serve four times against Zakopalova, but was delighted to have only made 18 unforced errors in a vastly improved showing from her loss to the world No.32 last Friday.

“I also knew if I didn’t have a shot and I kind of stayed in there, used my slice, I didn’t think she liked too much in Hobart, then I was going to be able to get myself back in the point even if I was down.”