Samantha Stosur is certainly not taking any negatives from her straight sets loss at the Hobart International to Klara Zakopalova, the woman who will also be her first round opponent at the Australian Open. 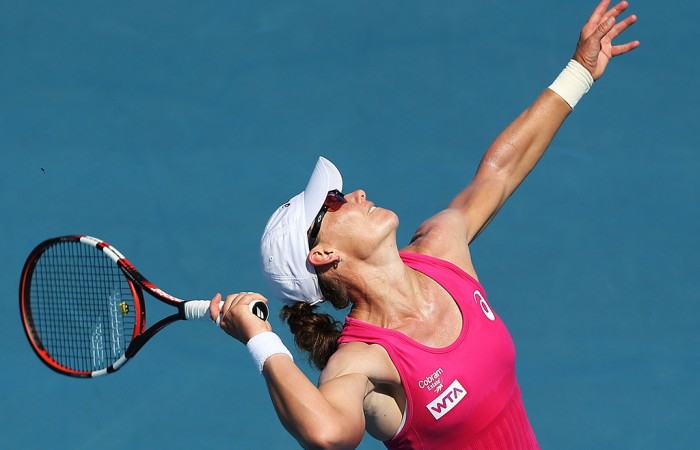 Paul Keating may have described it as the loss she had to have.

Samantha Stosur is certainly not taking any negatives from her straight sets loss at the Hobart International to Klara Zakopalova, the woman who will also be her first round opponent at the Australian Open.

“Whatever happened yesterday, I thought it was exactly what I needed.” Stosur said in Melbourne today where she has begun preparations for her home Grand Slam tournament.

“Look, obviously yesterday would have been nice if it went my way. But, you know, it gives me a chance to really think about what happened and try and work on things and go into Monday, you know, with a clear mind. I certainly won’t be thinking about that last match a couple days ago.”

The 29-year-old Stosur is more than happy with her preparation for the Australian Open and believes that, despite the semifinal loss, Hobart has been one of the better lead-ups she has had in recent years.

“It was nice to get those three really good matches under my belt and it’s always something I kind of lacked going into this tournament, was match play. Yeah, it was actually nice to get that this time around.”

Another factor that weighs heavily in the former US Open champion’s favour is her record against Zakopalova in Melbourne. Incredibly, Stosur will meet Zakopalova for a third time in the first round of the Australian Open with Stosur winning on both previous occasions in 2007 and 2009. She couldn’t help but marvel at the mysteries of the draw.

“It’s a bit strange; this will be the third time we’ve played in the first round of the Aussie Open. A little bit weird.”

Stosur recently teamed up with new coach Miles Maclagan and, although she acknowledges that it is still early days, she is happy with the way things are progressing.

“I’m really pleased with the way it’s gone so far with Miles. I’m enjoying my time on court, the way that things have gone, discussing things after matches, all that kind of thing.” said the No.17 seed.

” I feel like we’re on the same wavelength, which is obviously a big plus. Yeah, looking forward to hopefully spending a lot of time with him in the future.”

Stosur is invariably faced with the questions about the pressure of playing in front of a home crowd and is happy to admit it does exist, but says she loves having the crowd support behind her.

“I guess there is (pressure), yeah, because I’m the top female player from this country. We’ve got a huge Grand Slam tournament.  But, you know, I don’t think that’s really bothered me this time around so far.

“At the end of the day it’s always been a really positive thing. Anyone that has ever come up to me just wants me to do well and they wish me luck. It’s always that nice kind of, you know, talk or whatever you want to say. I know they just want the best for me.”

For Stosur, she would love nothing more than to return that favour and deliver the Australian fans their first female title since 1978.

“I want to try to play well and play my best tennis here in Australia and give them all something to cheer about. It is what it is. I do enjoy playing here. I just want to try to do as best as I can.”

Stosur’s compatriot Ashleigh Barty faces one of the toughest draws of the tournament when she faces five-time Australian Open Champion and current world No.1 Serena Willams in the first round. Stosur is a member of an elite group who have managed to defeat Williams in a Grand Slam tournament and says she would be happy to give Barty some tips.

“If she wants them, sure. Look, playing Serena is always a tough prospect. I think Ash has to go out there, soak it all up, really enjoy the moment. Obviously she’s not expected to win. But go out there and have as much fun as you can. I guess it will be a really good opportunity for her to play one of those big-match moments so early on in her career. Yeah, I mean, but Ash is a good player and I’m sure she’s going to love the opportunity.”

Stosur will play Zakopalova on Rod Laver Arena this Monday.