Bulgarian Tsvetana Pironkova has won her first career title at the Apia International in Sydney but admits she almost gave the game away. 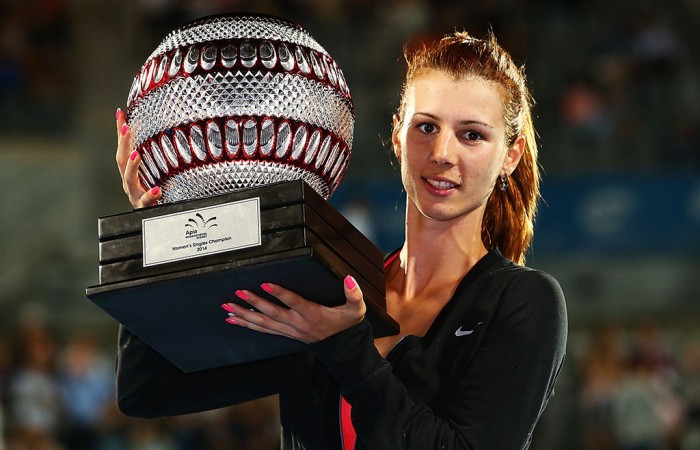 It was a long-awaited first title for the 27-year-old after eight years and more than 200 tournaments as a professional player.

And having enduring a horror season in 2013, when she suffered 13 first-round losses to slip to 107 in the world rankings, she admits she considered throwing it all away.

“I will lie if I say that I haven’t, especially having so bad results last year. It crossed my mind few times,” she conceded.”

“But, you know, after all, this is something that I’ve chased all my life.

“One bad season, I said to myself `Okay, it sucks, but you have to keep pushing. You have to go forward. Just take all your chances and do what you have to do, and then we’ll see what happens.’”

The Bulgarian displayed the same steely determination against Kerber, who was her third top-10 victim of the week, having also accounted for French Open runner-up Sara Errani and former Wimbledon champion Petra Kvitova on her way to the Sydney title.

Pironkova, who has been ranked as high as 31st in the world, will now face little-known Spaniard Silvia Solar-Espinosa in her first round of the Australian Open next week.

But the Bulgarian, who has now emerged as a player to avoid at Melbourne Park, will likely have to get past Samantha Stosur in the second round if she’s to stay on course for a possible fourth-round date with world No.1 Serena Williams.

Pironkova, who will surge up the rankings to crack the top 60 after becoming the first qualifier in three years to win a WTA tour event, prefers to play on grass, having reached the semi-finals, quarter-finals and fourth round at the All England Club.

But she looms as a dangerous floater in Melbourne after racking up eight straight wins on the Sydney hard courts this week.

And while she admits the intense schedule has taken a toll saying “I feel like my legs are going to fall apart”, she says her sky-high confidence is just the tonic.

“I feel amazing,” she said.

“So going to the next tournament, yeah, my body doesn’t feel the greatest, but I think I have the right mindset and the confidence needed.

“I know now that I’m capable of beating everyone. I’m just going to try to repeat it.”