Bernard Tomic looks on track to defend his Sydney International title after booking his place in the semifinals with a clinical victory over Ukrainian Alexandr Dolgopolov. 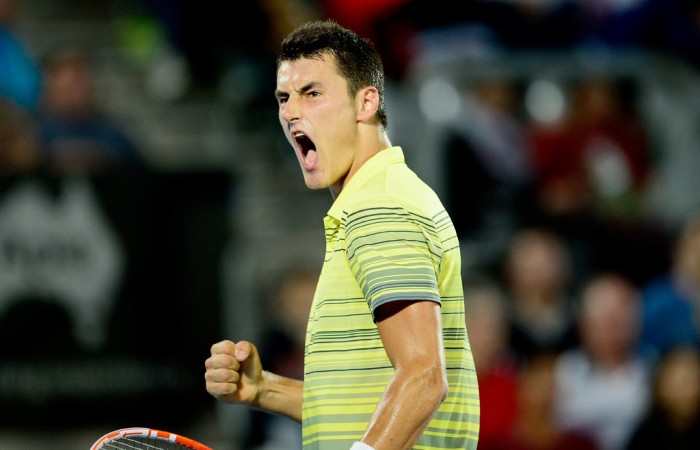 Bernard Tomic looks on track to defend his Sydney International title after booking his place in the semifinals with a clinical victory over Ukrainian Alexandr Dolgopolov.

The world No.52 Australian needed just over an hour to post the 6-4 6-3 triumph at the Sydney Olympic Park Tennis Centre.

In six previous encounters Tomic had only managed one win – a five-set slog in the second round of the 2012 Australian Open – but on Thursday night made light work of the Ukrainian.

Momentum swung in the opening set with both players exchanging service breaks.

But with Tomic looking like taking the set the Ukrainian saved two set points at 5-3 down before going on to brake Tomic and bring games back on serve.

Dolgopolov saved another two set points the following game before Tomic finally closed it out 6-4 on his fifth attempt.

From here on Tomic steamrolled Dolgopolov getting the early brake in the second set to race to a 4-1 lead before serving out the match 6-3.

Tomic opened his title defence with an equally convincing win over eighth-seeded Spaniard Marcel Granollers before being pushed to three sets by Slovenian qualifier Blaz Kavcic on Wednesday.

“It’s very difficult to play Alex my record was 1-5, so I wasn’t too pleased when I found out I had to play him and I had to prepare as well as I could,” Tomic said.

“I felt like I was playing like I was in the first round and that gave me confidence because he’s one of the most unusual players you could play, he’s very talented.”

Marinko Matosevic could set up a dream all-Australian semi against Tomic if he triumphs over Ukrainian Sergiy Stakhovsky in the last quarter-final on Thursday night.

Earlier towering Argentine Juan Martin del Potro won through to the semi-finals with a 6-4 3-6 6-3 win over Czech Radek Stepanek.

But the wily Stepanek managed to frustrate del Potro in the second set, to the point where the usually impeccably behaved 2009 US Open champion thought he might lose it.

“Yeah, I was close, but I can’t do that yet. When I get eight or ten racquets, I will smash all of them,” del Potro said with a smile.

“I will talk with the chair umpire to not call me a code violation or something. I have to be allowed to do that after two years.”